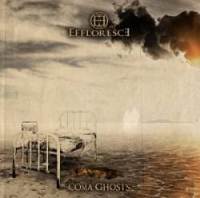 Effloresce is a Progressive/Symphonic Metal band from Nuremburg, Germany. They are a five–piece with a female vocalist, and write music in the vein of Dream Theater, Epica, and 1970’s prog.

This band has been around since 2009, when they released an EP titled Shades of Fate. This, their debut album, Coma Ghosts was released February 10, 2012.They had the privilege of working with producer Dan Swanö, who produced Opeth’s Morningrise.

Most metal bands I’ve found that have female vocalists tend to write music similar to Nightwish, much to my chagrin. Imagine how happy I was to find that this band was not another one of their clones.

Coma Ghosts bears some similarities to Nightwish, but very few–a female vocalist (and a dang good one at that), synthesized orchestral sounds (flute, strings, etc.) along with the traditional metal band instrumentation. But that’s where the similarities stop; you’ll easily be able to hear the difference between the two. I think that’s good; I’ve never really gotten on board the Nightwish train, and I much prefer this band instead.

“Crib” starts out with a heavy prog metal rhythm underneath Nikki’s soaring voice. The Dream Theater influence is never as apparent as in this song, but it’s different enough to not be a complete rip–off, thanks to a much heavier, meaty second half of the track. “Spectre Pt. I: Zorya’s Dawn” has more orchestral touches to it, but they’re tastefully incorporated. The metal and orchestral nuances don’t overshadow each other, and it’s quite nice to hear. I wonder if they’re going to pull what Dream Theater tried to do with Metropolis Part I, and not write a sequel to it unless fans demand it. “Pavement Canvas” shows something I particularly like about vocalist Nikki; her clean vocals are so clear and effortlessly beautiful, but she also has the ability for gut–wrenching metal growls. She’s as complete a metal vocalist as one can ask for. “Swimming Through Deserts” is mostly a soft song, but there are still progressive tendencies to it, albeit very subtle ones you’ll have to listen hard for. “Shuteye Wanderer” is an epic sixteen–plus minute track that has thrash, progression, melody, great vocal and instrumental performances, heavy and soft parts, everything–it’s all here. The best of this album is saved for last.

Effloresce isn’t a more–notes–than–god prog metal band. There’s ample virtuosity between the members, but they use it to craft more interesting material rather than put more notes everywhere. Coma Ghosts is a jack–of–all–trades album; everything the band does here is done well. I can’t really think of anything wrong with this album. Well done, Effloresce.