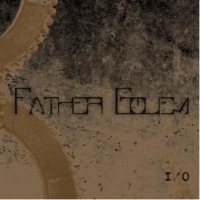 One has to respect musicians who keep trying to make music even though the years haven’t gone according to plan. Father Golem appears to be one of those bands. They’ve existed since 1999 (under a different name then) and have kept making music and changing their sound, but have yet to get appropriate recognition.

I hope their latest offering, I/O, reverses that trend.

I/O is a progressive metal album if I’ve ever heard one. The songs are lengthy; the vocals are high and operatic, the guitars always doing, well, at least something interesting. And the balance between anger and sublimity is done wonderfully.

Most prog metal bands–and consequently their albums–tend to have lots of impressive musical showmanship, but this album doesn’t have quite as much of that as one may expect. Don’t be deceived, there is plenty of talent to be had here, but this band’s greatest strength is the songwriting. Each song is crafted meticulously to be as perfect as it can. Listening to it gives a feeling that what you’re hearing is completely natural for this band to produce.

“Circle Of Light” is probably the most well–rounded track here. It’s got all the elements progressive metal is known for, which I mentioned earlier. “Sole Survivor” is more of the same. My personal favorite is the final track “The Evercycling Journey Part II: Impact!” which starts out with a very big bang.

I can’t quite put my finger on why I like this album so much. It’s simply a well-executed album. The songwriting is top notch, and it’s produced beautifully. A bit of a haul to listen to, I admit, but well worth the effort. In fact, I think it’s refreshing to hear prog metal that isn’t a shredfest every once in awhile. Here’s a keeper.