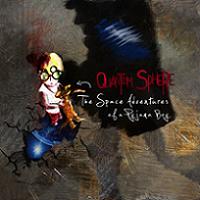 Coming to us from London via the outskirts of the Milky Way, Quantum Sphere’s The Space Adventures of Pyjama Boy is one album that will grab your attention like the pull of a black hole.  Consisting of Joe Pearson (guitars), Greg Knox (bass) and Mark Smith (drums), this trio is influenced by a wide range of things from science to computer game music, which makes for one fun and creative production.  There is not a band quite like Quantum Sphere.

“The Space Adventures of Pyjama Boy” is a good introduction to what is going to be seen on the rest of the album.  If you are into complex music with a spacey touch, then Quantum Sphere is the band that you are looking for.  There is a lot going on here yet it comes together so well. The journey continues with “The Fornax Void.” It is a song that shows off the different music styles that have influenced their music. The keyboards are dazzling here and the guitars and drums are pretty funky as well. The tempo shift at the end is moving and unexpected, which heightens the emotional impact.  This one gets my vote for best song on the album.  “Fractal Dimensions” is a beautifully complex song with an edge to it.  There is a sense of mystery, wonder, and perhaps a touch of dread in the music.

The opening for “Preplexia” is fantastic as it builds up to an explosion of sound.  This is one song where you can certainly hear the title in the music.  The rising and falling of the music will keep you on your toes.
“Interplanetary Probe” has an overall lighter atmosphere than some of the previous songs, which is a welcome change that keeps the music fresh and the album from becoming stale.  The mesmerizing opening of “Error” starts off an altogether gripping song. It is like riding a comet across the galaxy with its feeling of wonder and danger. It comes close to matching “The Fornax Void” for the honor of best song.  “Tachyon Pulse Induction Protocol” (Try to say that fast five times!) is another display of Quantum Sphere’s musical skill.  The way I would describe “Amastia” is that is like falling through a kaleidoscope.  “Attack Ship on Fire off the Shoulder of Orion” is one last adventure before the end and it is a spectacular as the name suggests.  It is filled with intense moments before tapering off into cosmic oblivion.

The Space Adventures of Pyjama Boy is just straight-up great music. With its distinct sound, Quantum Sphere is a band that will be hard to forget and one to watch as it brings forth new music. This album should accompany you on your adventures whether it is across town, to another country, or to a restaurant at the end of the universe.