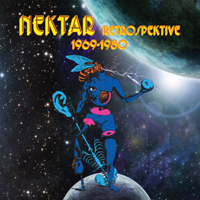 If you are a Nektar fan you more than likely have most of their albums already including all the remasters. If you are a huge progressive rock fan and have an interest in this band then this set is no brainer.

Retrospektive 1969-1980 (yes that is the correct spelling on the title) is a fascinating and compelling combination of music.

For the collector and music lover in general, this box set offers rare recordings of Nektar frontman Roye Albrighton’s early band Rainbows as well as full liner notes, a 50+ page color booklet with rarely seen photos and adverts plus a full discography, a free albeit psychedelic poster and a button with a picture of the character on the box cover. For those new or familiar with this band it serves as an introduction to some of the best recordings from the meat and potatoes of their catalog which includes the legendary prog rock classic recordings Journey To The Centre Of The Eye, A Tab In The Ocean and Remember The Future.

What I found interesting was the progression of this band while listening to this retrospective of their most fertile and influential period. They are perhaps one of the most underappreciated yet beloved bands of the genre. Their appeal stretches across rock, psychedelic and prog. So honestly, if you happen to enjoy any of those genres there is some ear candy here for you. I must say the accompanying booklet is a tremendous asset to this set and it is all stowed away in a quality box set. Once again Cleopatra Records has done their utmost best to pay tribute to the band they are covering with admiration and many extras that you normally do not find in any compilation.

Worthy of note as well is a new cover album coming out by Nektar on the same label titled Spoonful of Time. That should be a very good listen as the band covers a wide range of popular songs over the years. Beyond that who knows where this amazing band will go? They are still touring with great success so it looks as though there is still plenty of gas left in the tank.

As a long time Nektar fan and total prog head I could appreciate every aspect of this box set and I look forward to more treats coming my way from the vaults of Cleopatra Records.