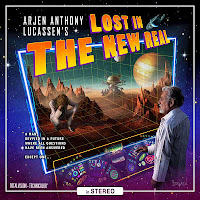 Arjen Anthony Lucassen has a reputation for producing massive rock operas with guest artists from all over the world that populate the progressive and metal arenas. He has always wanted to do his own solo album while handling all the lead vocals. He also plays nearly every instrument. The time has arrived and so has the two album set Lost In The New Real.
I decided to get the deluxe package to support this fabulous artist. The package includes 2 colored vinyl LPs, (disc one green and disc two blue) and the LP sleeves are covered in magnificent and colorful artwork with the lyrics to every track on the flipside, a 3D postcard of the album cover, poster, 2 CDs, and a T-Shirt. Now this is how it’s done folks, you have to offer something special and most certainly this package is. And the icing on the cake is Arjen signed the album per my request when I ordered online. There were 2,000 copies of this particular package for pre-order and it sold out in a few weeks.
I have made it no secret that this man is one of my favorite all time artists while endeavoring to cover everything he has released. I might I add that I have enjoyed all of his output over the years. His artistic vision is a clear path to musical nirvana every time.
So what should longtime fans and prog rock enthusiasts expect from this set? You can count on some great music from an artist paying tribute to a lifetime of influences in music, theater, TV, and science fiction - essentially all the contributing factors that make great prog. And with that Arjen has created a Salvador Dali of progressive rock again (think of the deflated clocks painting for instance). It is unmistakably Arjen and I am so glad he decided to handle the vocals; he does a fine job without any help from the normal cast of characters he employs. This is his story to tell so it was only appropriate that he gave it to us with his own voice. Rutger Hauer does the narration (like Vincent Price did on the Coop’s Welcome To My Nightmare) on the recording as Dr. Voight-Kampff and Arjen plays Mr. L.
This is Arjen’s New Real where Hendrix played the flute, Dylan never got stoned, and Madonna was a virgin, an alternate reality beyond belief. The theme is futuristic and then again very much in tune with today when he sings about cyberspace and being “on” 24-7. At times it’s hard to distinguish what is real or imagined anymore in our cyber and reality TV world. He asks the questions “Am I alive or dead, am I man or machine?" But then that is the point of this album, what is your reality? It is what you make it or what you believe to be true. Have you seen “Pink Beatles In A Purple Zeppelin” lately? Maybe you have but that could depend on whether you are lucid dreamer, took too much LSD in the 60s, are just delusional and gone mad or perhaps you have a great imagination? Arjen brings your senses to a tipping point one way or another with words and music.
I listened to the CDs and the LPs and it all sounds fantastic, offering an all-encompassing work of art that should not be missed by any music fan. Even though this is progressive rock it crosses the line enough over to elements of rock and pop to please just about any audience, much like one of his most admired bands The Beatles. It’s all Arjen giving every ounce of talent he could possibly give to his beloved fans. He is one man that knows that without the music fans he is nothing and he acknowledges that. Arjen has always been open to communicating with his audience and he does so in the best possible way by offering a tremendous group of songs and a good story to chew on for a while. Fine musicianship, artwork, collectable items, what more can a music fan ask for? More artists need to do this. You cannot get a free download of a vinyl LP, T-Shirt or poster. This is one option that works and the artist finally gets paid. He so deserves it.
I think this release is as good as any Arjen has put out and something to be proud of. He does some great covers on this set besides all of his compelling original material, notably the Led Zeppelin classic “Battle of Evermore.” This is his tribute to his influences and he doesn’t drop the ball like so many people do when covering a favorite artists. He makes it his own, and that is the key to getting the respect of the original artist and your listeners.
Arjen never stops creating; I have no doubt he is already working on a new project, not allowing time to enjoy the success of this release. Always looking forward, remaining consistent and creating new music is what this musician is all about. This is a valuable lesson to those reaching for the stars in an industry where it is nearly impossible to get to the top of the mountain. This individual has his own star that is burning brightly with no signs of dimming anytime soon. I am grateful for that.