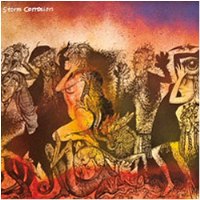 Opeth is one of my top 5 most favorite bands. Porcupine Tree is not far behind. Imagine my reaction when I first learned of this project, a collaboration between the brains of the two aforementioned bands.

Mikael Åkerfeldt and Steven Wilson write music that is different from each others, but similar enough for such an effort as this to work well. Both can play loud and heavy, but they balance quiet and tranquility alongside it beautifully.

On this album, Storm Corrosion, their heavy sides are nonexistent. This is an exercise for the other half of a metalhead’s brain, which isn’t devoted to music weighing in at twenty tons.

This being a prog album, certain staples are expected to be heard, and they are. The songs are on the longer side (all but one are at least six minutes long). They also utilize chromaticism, occasionally the tritone, and sometimes overdubbed sound effects to manufacture chaos (“Storm Corrosion”). But these are not from page 1, chapter 1 of the proghead bible. They use copious amounts of minimalism to keep the album’s feel darker than lighter. But it’s not so much that one would need to stop and listen to a pick–me–up song; the balance itself is very noticeable and quite intriguing. “Hag” is the best example of all their musical goals on display; there’s no distorted guitars, hardly any drums, some very pretty passages, and aside from some sound effects tracked over the instruments, not much else to write about.

And yet, despite songs so minimalist that would appear boring at first listen, the band manages to capture one’s attention and hold on to the end. Just when it feels like it’s starting to drag, or become to repetitive, or simply not have anything interesting, something else is injected. But the manner of how it’s done is brilliant; it’s enough for one to notice them, but not so radical that it feels out of place within the overall song structure.

This project reminds me of Brahms’ composing. It doesn’t sound radical the way Wagner’s did, which showed you its complexity by shoving it in your face. Brahms’ work was subtler; you had to listen hard to hear what kind of things he was writing. There weren’t any fewer complexities, but rather presented differently.

If I had to complain about anything, it would (once again) be the overuse of the same name. Storm Corrosion is a great name for either a band, album or song title on their own, but not all three at once. I would also like to hear more of Åkerfeldt’s voice. But I’m being nitpicky.

I can’t recall hearing anything by Åkerfeldt  and Wilson that I didn’t find something to like about. If you’re like me in that regard, or you’re just a general prog fan, you should not miss this one.