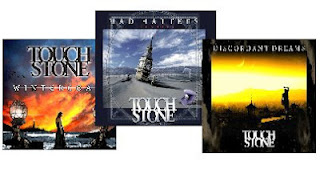 Touchstone is a progressive rock band that hails from the UK. Rocking it out since 2001, with a few changes in its members, the current lineup is comprised of Rob Cottingham (lead and backing vocals), Adam Hodgson (guitars), Paul 'Moo' Moorghen (bass, backing vocals, keyboard, drum programming and SFX), Kim 'Elkie' Seviour (lead vocals) and Henry Rogers (drums). The band is re-releasing three albums this summer to coincide with an autumn tour of Europe with The Reasoning.

The re-release of Wintercoast (2009), Discordant Dreams (2008) and Mad Hatters (2006) brings us bonus tracks on each album and a stunning collection of progressive rock. The bonus songs are live performances that make you feel like you are right there with the band. Having listened to their new release The City Sleeps from 2011, I knew I was in for a treat. The band has a cohesive quality that really resonates and comes across with everything they do.

“See the Light” is the fourth track on Discordant Dreams. When the first notes begin to play it startles you because you think you are listening to the tune from The Exorcist. The guitar work is stunning with riffs that make you feel like you would walk right into Hell if they would just keep playing like that. The keyboard adds a powerful exclamation point and the music begins to wind together like a vortex of sound. Soft male vocals are met with equally delicate female vocals from Kim Seviour and the sound tableau is set. This piece is unique in that it pauses, like a breath between dreamscapes. The melodies and composition create a compelling piece that is wonderful to behold.

“Blacktide” from Discordant Dreams is one of my favorite songs from the triple album collection. A full -fledged fairytale set to rock music, the delicate, yet piercing vocals from Seviour enrapture you into following wherever it is she leads. Guitars and percussion hammer out a rhythm beautiful and fierce enough to blink a tear out of your eye and if you close your eyes, the sweet burn of the music will carry you away.

“Misguided Fool” is an enhanced song from Mad Hatters. The electronica element to the keyboard at the onset is a bit of a departure from the later songs from the band. Woven into intricate circles, the guitar riffs enter the picture and blaze a trail of sin and seduction. The vocals are strong and pure in their resonance. Lover or fool? Images of the tarot surround this song with the eternal question played out on every note.

Once again the band has succeeded in crafting a strong piece that kept my interest in the entire album, no matter how many times I listened to it.

“Strange Days” from Wintercoast will have every guitar lover out there plugged in and turned on. The riffs in this piece are phenomenal. Blending metal and progressive rock, this piece has energy that will possess you and carry you into the night. A tale of dragons and fantasy adventure, this will appeal to the roleplaying crowd and anyone who loves a great sci-fi or fantasy book. The guitar riffs are ripping and the vocals are engaging. A keeper song!

Touchstone is a band you are going to want to watch. They have a fire that just won’t be quenched. Wintercoast, Discordant Dreams and Mad Hatters have now been enhanced with newly added live performances and are better than ever. Each album is full of great sound, but my absolute favorite has to be Discordant Dreams. If you enjoy metal or progressive rock, you should give these albums a spin. The powerful vocals and epic guitar will thrill fans of Evanescence and Nightwish.