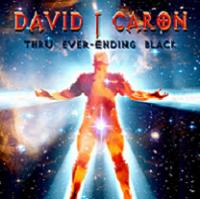 Beaming out to the universe by way of Ireland, David J. Caron’s Thru Ever Ending Black is a very impressive debut double album that combines a range of musical influences to make for a refreshing experience. With intelligent and inspiring lyrics and a unique sound that is sure to stay with you, David J. Caron is master of his music.  Featuring 28 tracks at a run time approaching three hours, Thru Ever Ending Black will take you on a journey from the comfort of your backyard to soaring through the cosmos and it is a journey that you will not want to end.

Starting off this marvelous double album is “It Gathers.” I am already hooked on David J. Caron after a few seconds. It is the first glimpse of his unique sound and I totally dig David’s voice. The way he sings has a rhythm that is hard not to jam along to.  The lyrics are filled with space terms and imagery that pervade the rest of the album.  “Look Out” continues in the same vein, providing for a smooth transition as if it could be one song. “Time Machine” has a light, dreamlike sound that portrays my vision of traveling through time. “Memory Magnetic” has everything that makes the album enjoyable with its catchy chorus, smooth vocals, and rocking music.

The beginning of “Feels of Fire” builds a sense of awe and wonder that had me starting the song over a few times. Capturing the spacey sound the best is “Unbreakable.”  Even more so than the sound, the lyrics lift this song and make it stand out with its ethereal ideas and hopeful outlook. Following up are the rocking “Dark of Night” and the dark and mystifying “The Knights.” As the first half heads toward its conclusion, “Too Much Little Time” has a sick guitar solo that caught me off guard.

“Beam the Ray” begins the second part of this double album.  A nice atmosphere is built off before leaping into a rocking sound. There are also more sick instrumental parts that really carry the album and help to take it to the next sphere of musical enjoyment.  Showing a lighter side to his music, the softer “In Me” is a welcome change and adds more musical diversity to the album.  The song handles the love theme without the usual cosmological/space content that has dominated the songs so far.  Continuing with the softer side, “Still Just One Moon” is a touching love song that is able to work in the space theme in a subtle and clever way.

“One by One” is one of the catchiest songs that I have heard in a while.  Straight away I am bobbing my head to the song. Besides giving some good advice, the counting style of the lyrics is what really makes this song stand-out in my mind and makes it so infectious.  “So Let There Be Light” is an excellent song that handles the creation myth. This is my favorite song on the album.  The music and lyrics are done perfectly.  It is like the beginning of an epic poem.  “Legendary” is second catchiest songs on the album. The music flows smoothly the way a cloud moves through the sky in this uplifting song.  “The Tree That Waits” is slow ballad type song and is definitely one of the true highlights as the Thru Ever Ending Black winds down. The lyrics to it are simply poetic.

Key Tracks: It Gathers, Time Machine, Memory Magnetic, Unbreakable, Beam the Ray, One by One, Final Bell, So Let There Be Light, The Tree That Waits