Review: The Flower Kings-Banks Of Eden 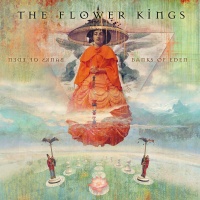 The Flower Kings are back! After a five year absence they have reformed to record a stunning album titled Banks of Eden. Roine Stolt felt at the time when they decided to take a break that it was necessary so everyone could go do what they wanted and then come back refreshed. He is glad they decided to do that because there was a concern that they would be getting too comfortable with their sound and fans would not hear anything different or any variations in their recording process. This release promises to deliver a few new wrinkles that are noteworthy but then again that is exactly what I would expect.

Well make no mistake this is The Flower Kings in all of their undisputed prog rock glory. I would encourage all listeners to check out the band member’s solo work, all of it is exceptional. And if you are prog fan you know what Roine has been up to.

The thing about this band is that they leave their egos at the door and entertain each other, thereby giving their audience a thrill a minute. The very first track “Numbers” kicks of the proceedings in true prog rock style clocking in at a gaudy 25:20. It is a superior amalgamation of advanced musical craftsmanship. I think the combination of Roine and Hasse Forberg (make sure you check out his recent Music Companion release) on vocals is magical and they play off each other beautifully. And as usual Roine’s guitar work is exceptional. The only position in this band that is rotating is behind the drum kit but it always seems to work out. Felix Lehrmann pounds the skins this time out and every other member is in their proper place to round out the band’s unique sound.  The only track that comes in under four minutes is “Lo Lines” on the bonus CD. A few examples that come to you packaged as food for thought are “For The Love Of Gold” and “Rising The Imperial.” On “Rising The Imperial” you get some real heavy things to think about with lines like “Rising the tide imperial, Leaving the world material, Enter a world superior, Leaving the world material.” In one verse our world of over indulgence and technology seems like a waste of time and the false gods surround us. You realize in a flash that only the true spirit of man and what is inside us can be revealed once all of the muck and garbage on the surface is removed. I got that message as if Roine was standing beside me with a megaphone screaming it in my ear.

I must comment on the exquisite artwork which is included with the accompanying booklet that also includes band pictures, credits and lyrics. This is one aspect of The Flower Kings that has gone hand in hand with their music (as it does with any great prog band) but this time they have something very special from Silas Toball (www.silastoball.com). The spacey other worldly drawings help set the tone of the album before you even start listening, but then again that is whole idea isn’t it? The recording is also available in a limited edition orange vinyl set with expanded artwork to enjoy, which by the way I am so tempted to get. This is an entire experience that should not be missed. I would recommend the bonus disc set because it is totally worth it to hear four more great tracks along with a video of the band and a tour of their studio showing their vintage soundboards and equipment. You don’t need to be a qualified prog head to enjoy a package like this, being a general music fan is the only requirement. This is just great fun and it should be taken as such. This does not take away from the stories being told mind you, their music can be very dark and telling at times so it is not all fun and games in the message that waits in the music, you can be certain of that.

The Flower Kings have not missed a step with the release of Banks of Eden. Their music always turns me inside out and then back again. I am mesmerized with their sound and stunned with the quality of musicianship offered up on this set. Is this a triumphant return to glory for The Flower Kings? Wave your flag Sweden because that is an understatement!

Key Tracks: Numbers, For The Love Of Gold, Rising The Imperial