Review: Rick Wakeman - The New English Rock Ensemble In The Nick Of Time-Live In 2003 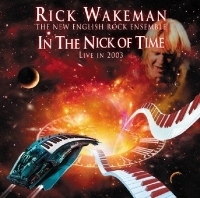 For the first time In The Nick Of Time-Live In 2003 is now available on CD. Rick Wakeman and The New English Rock Ensemble recorded the album in the U.K on the Out There tour in 2003.

The band featured Ashley Holt (vocals), Tony Fernandez (drums), Ant Glynne (guitar) and Lee Pomeroy (bass).
Rick Wakeman remains one of the most recognized and admired keyboard players in the world. I can count on one hand who I think are the best and this gent is right at the top with greats like Jordan Rudess. Of course he made his mark long before people like Rudess so that needs to be taken into consideration. He goes back a long way. For over 40 years now he has been entertaining audiences with his tremendous talent and humorous storytelling. If you ever get a chance to pick up one of his solo gigs on DVD make a point to do so. You will discover a Wakeman you never knew before.

This archived recording is exceptional. While I appreciated Ashley Holt’s most appropriate vocals for the music it is the keyboard sprints throughout this live performance that captivated me. There is something about Rick’s playing that separates him from everyone else. There are many reasons for that however there are two things that really make his music shine, his natural talent and who he is as a person. All of that comes flowing through the music like an erupting volcano and it is captured quite well on this CD.

The curtain raises and sets the stage for the entire performance with ”Catherine Parr / Beware Your Enemies.” It is a superb opening montage. “The Cathedral In The Sky” conjures images of space travel and beyond and brings the title Out There into proper perspective. Wakeman’s music is very visual so words are never a necessity to paint the picture he desires. Some of the guitar playing I could really appreciate as well. Ant Glynne is not a recognizable name but trust me he is more than adequate and surely Wakeman knows who has what it takes to play his music. “White Rock” and “Wurm,” which serves as the grand finale, put the bass and the guitar in the spotlight quite nicely so you can really appreciate more than just the spectacular keys from Mr. Wakeman.

I am sure many folks have been waiting for this recording to surface for some time now. Gonzo Multimedia from the UK always does a nice job representing artists and puts out some quality packages. Is this a must have for prog heads, Yes and Wakeman fans? I would answer that with a resounding thumbs up.

Key Tracks: Wurm, The Cathedral In The Sky, Catherine Parr / Beware Your Enemies

Email ThisBlogThis!Share to TwitterShare to FacebookShare to Pinterest
Labels: In The Nick Of Time-Live In 2003, Prog Rock, Rick Wakeman, The New English Rock Ensemble