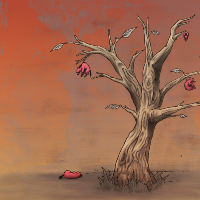 I think that the progressive rock scene has always had an identity crisis. For instance, in the late 60’s and early 70’s, bands such as Pink Floyd and King Crimson were often noted as being the pioneers of prog rock, featuring sweepingly epic songs that bridged the gap between popular rock music and 20th century art music. Today, bands such as The Mars Volta lead the way for the genre, who although follow similar song structures as their ancestors, blend more genres into their sound, such as math rock rhythms and complex jazz harmonies. While neither is more progressive than the other, the two sounds are vastly different from one another. Bristol (UK) based group ANTA falls somewhere closer to the earlier time period, with their self proclaimed “regal” debut record creating a bare and vast landscape, with sound that easily matches the records artwork.

Though The Tree That Bears the Equine Fruit is only five tracks long, that doesn’t necessarily mean that the record is short, with the majority of the tunes tapping out after over eight minutes. After a couple of minutes of listening to their powerful opener “Abyssal Ibis,” I thought I had a pretty good idea of how the next 30 minutes would sound, but luckily I was only a little correct. Throughout The Tree… the listener is taken on a dynamic ride, using an arch structure that begins strong, mellows out in the middle, and ends strong. In that light, the record reminds me of the overtly dramatic compositions of Gustav Mahler, whose symphonies often were structured similarly. However, where Mahler’s ability to dissect and vary his melodies leaves him shining, ANTA falls flat. For instance, the closing track “Apical Dominance” starts well, with soaring organ melodies that weave through off kilter rhythms in the drums and bass. However, the song literally repeats itself at the halfway point, as if they copied and pasted the previous section again into the song. While this is common practice in art music, its intention is often to prepare the listener for an even more impacting development, since they’ve heard the previous section twice. In ANTA’s case, the song merely ends once it repeats, resulting in a disappointing understatement.

I think the groups somewhat half-finished feel of some of their songs could be remedied quite easily. Instrumental music has always been the most successful when the music either changes in mood and texture, or if the music stays the same for an extremely long time. In ANTA’s case, that concept is clumsily met in the middle. In songs such as “Abtenauer Oak,” the group showcases it’s ability to create a dense and beautiful sound, something quite impressive for a quartet to accomplish. However, its experimentations in sound only last for a couple of minutes, not nearly enough time for the listener to fully be engulfed in the tones they could have spent hours honing in on. Perhaps I’m missing something, but my gripes with the bands repetition could also be fixed with the occasional use of some vocals. Even the most progressive groups have used vocals in their music, making the instrumental sections in songs such as King Crimson’s “In The Court of the Crimson King” all the more intense in between the vocal stanzas. Songs such as “Firn” are certainly great without vocals, since it’s brevity and constantly evolving melody actually contradicts most of my complaints. However, some of the more ambitious tracks on the record would probably pack more of a punch if they had something that the listener could hold on to for more variance, instead of sounding like a band that just can’t seem to find a singer.

On a more positive note, I think that ANTA shows originality and shows potential to be a band that can add some new colors into the prog rock scene. Their Queens of The Stone Age “desert rock” meets early Pink Floyd experimentalism is something I haven’t heard before, and for that I give them a sincere kudos.

Since The Tree That Bears the Equine Fruit came out almost two years ago, I’m sure the band is hard at work honing in on their craft as I write this review. Like any good artist, good musicians learn from the decisions they’ve made in the past, and are constantly trying to push their own boundaries in order to create the best material they can. I hope that lies their future. In any case, I look forward to following ANTA, and I hope that the promises that they’ve implied in this debut record are kept and built upon on whatever they decide to follow up with.