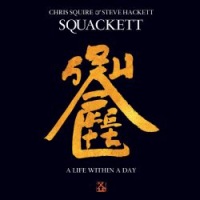 Unless you have been part of a cryogenics experiment or stuck in another dimension, the collaboration of two of prog rocks “elder statesmen” finally joining forces to form Squackett will not be surprising news. One of the most influential bass players, Chris Squire, a founder member of Yes and ever present since 1969, and a truly gifted guitarist, Steve Hackett, finally noticed in Genesis (from 1970-1977) and then solo, coming together to release an album is a great reason for prog rock fans everywhere to have licked their lips in anticipation.

Life Within A Day contains 9 tracks varying in length from just over 3 minutes (“The Summer Backwards”) to 6.5 minutes (“A Life Within A Day”). The rousing opening track “A Life Within A Day” has a real old-style prog feel to the start and then goes into a sequence that recalls Led Zeppelin (as does Track 7 “Storm Chaser”) but never mimics the old rockers. The guitar of Steve Hackett adds little motifs here and there and there and is a nod towards the sound of Yes around the halfway mark. It is a cracker of an opening track that literally grabs you immediately. By the time you are into Track 2 “Tall Ships” there is a feeling of comfort….like wearing a favorite old pair of jeans…but no thoughts of “heard it all before” come to mind.
“Aliens,” “Sea of Smiles” and “Perfect Love Song” all highlight the classic bass playing of Chris Squire and feature ample opportunity for Steve Hackett to show his skills. Their vocal harmonizing is found further in and out of the mix on different tracks but they complement each other well. Three tracks tend to be less like prog than the others, “Divided Self” has an almost country rock feel ultimately ends with a whirling Wurlitzer organ. “The Summer Backwards” leans towards a simple pop record and “Can’t Stop The Rain” has a very jazzy feel to it.

Overall Life Within A Day is an excellent album for a debut, with enough prog moments to satisfy but also enough variation to please a much wider range of listeners.