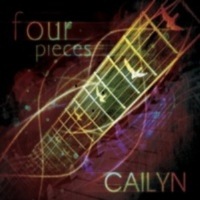 Cailyn (Lloyd), to give her full name although she only uses her first name,certainly entered the music arena early in life, learning to play piano at age 6 and violin at age 8. There are also not many teenagers who can claim to have played guitar at the famous Marquee Club in London, UK. Not content with these instruments, bass and drums were added to this list before taking time out to raise a family. Now she is firmly back in the music scene full time with the release of her 3rd album Four Pieces.

This album, Four Pieces is described as a fusion work between classical music and progressive rock. This, of course, is not a new concept, e.g. the late Jon Lord’s meisterwerk for Deep Purple, Concerto for Group and Orchestra (1969), or the UK No. 5 hit single for Love Sculpture with a high speed guitar-led “Sabre Dance” (Aram Khachaturian) back in 1968. So, does Cailyn bring anything new to this particular musical table…

The album is called Four Pieces for the very simple reason that there are four tracks, varying in length from 7.5 minutes to 13.5 minutes.

“Fantasia,” track 1 and also the longest, is based on the Vaughan-Williams classic piece, “Fantasia on a Theme by Thomas Tallis.” Never straying far from the original score, which was for strings, Cailyn manages to insert into the musical mix a plethora of other instrumentation which really moves the music into this classical/progressive fusion. The guitar work is crisp and clear and never overpowering , as well as being sparingly used, as are the input of bass, drums and synths. The track flows along, seemingly effortlessly, but with real depth. An excellent opening track.

“Largo,” track 2, is taken from Dvorak’s New World Symphony and is a slower paced piece of music, which also sees the music take on a much more blues/soulful feel. Featuring again, the very tasteful and sympathetic guitar work from Cailyn, which never obscures the masterful piece of music originally written over a century ago…and is there anyone out there who would not instantly recognize the deep bass notes of Dvorak’s work.

“Adagio,” Track 3, is another interpretation of a piece of classical music again scored originally for strings, in this case, Barber’s Adagio for Strings. This track is certainly the most atmospheric of the album thus far, with the guitar showing a bit more of a bite, but again remaining understated, allowing the piece to flow towards a crescendo around the 5.5 minute mark then a more subdued meander to the coda.

“Nocturne,” the final track, is an original by Cailyn. A guitar duet sets the scene…very soothing and beautifully played by the lady herself. This track builds up with more insistent, driving guitars to the halfway mark in the music, before more of the dueting guitars ( not dueling!) Another hauntingly beautiful piece of work…fading out to the sound of the sea.

All in all, while this album is not an earth-shattering, must have, multi-million seller, it is an album that allows you to relax totally, yet still retains your interest in all the 40 minutes of music. Cailyn is a very impressive musician, who has ultimately shown that real sensitivity and understanding of classical music allows a musician some leeway in interpretation, and this she has taken to a superb level.