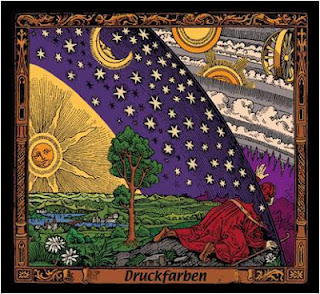 Druckfarben are a Canadian band that are relatively new, doing their first gig in the first quarter of 2008. The five piece band comprises Phil Naro (vocals), Ed Bernard (guitars), William Hare (keyboards), Troy Feener (drums/percussion) and Peter Murray (bass/vocals). To clear up the question at the forefront of everyone’s mind, Druckfarben was a word that the band found stenciled on some black barrels on a rehearsal space they were using, and apparently it is a German expression, literally meaning printing ink.  It certainly stuck in their minds as we now have the debut album from Druckfarben.

Druckfarben started off performing covers of Yes/Genesis/King Crimson/Gentle Giant and others in the same genre and indeed, legend has it that the first song at that debut gig in 2008 was “Close To The Edge”….a confident band indeed! The band were always working away at original material and the result is their self-titled CD.

There are nine tracks of varying lengths from the short instrumental starter, “ELPO,” at 2.5 minutes to the album finale with “Nonchalant,” clocking in at just over 7.5 minutes.

“ELPO” is a great starter track to the album, keyboards to the fore, and just a hint towards ELP, well the title suggests more than just a hint. Certainly it sets the scene for what is to follow. Track 2, “Influenza,” has a very distinct Yes feel to it, with Phil Naro’s vocals reminiscent of Jon Anderson (if not quite that high) and that superb guitar sound from Ed Bernard certainly calls to mind Steve Howe. Great keyboards from William Hare around the 3+ minute mark followed by a chance for the bass player, Peter Murray, to “have a blast” before it builds nicely to a finale.

“Smaller Wooden Frog” has an interesting title, fairly long keyboard intro, and interesting, if somewhat harsh, time changes leading to a comparison with the Flower Kings. Not quite as seamless switches in time changes as the master, Roine Stolt, but retains the interest through the song.

Track 4, “Dead Play Awake,” has excellent guitar runs by Ed and memorable riffs, but I find that Phil’s voice seems a bit low in the mix, even when boosted by Peter on backing vocals. The feeling is that there is a constant battle between the music and the vocals which detracts from the song. A beautiful piano melody is taken up around the halfway mark with lots of echo on the vocals and this changes the track totally. The “oomph” returns to take the song out and again the indistinct vocals reappear.

Almost halfway through the album and I am sitting in the big comfortable prog rock armchair, fairly pleased with the way things are going. ”Walk Away,” track 5, has a good guitar intro, but certainly seems to fit more into the AOR genre than earlier.  Not a particularly memorable track…but short.

“Seems So Real,” follows with a keyboards and bass intro, which is a bit on the quirky side and definitely different from the earlier material. It is a slower tempo song. There is lots of strumming guitar and clear vocals but merely pleasant and not in any way memorable.   “Nat Nayah,” is a welcome return to the Yes style with guitar, piano, strings intro and great clear keyboards soar into the mix just after 3 minutes and continue on merging with the cultured guitar work of Ed again. This is a much more interesting track again after the slight lapse.

The phrase, “just when you thought it was safe” now springs to mind with track 8, “Sons of Anakim.” A jazzy start, but when the vocals appear, the only thought that I had was…grates!  The backing, a sort of jerky rhythm, seems to be involved in trying to outdo the vocals and the guitar and keyboard breaks just seem to be discordant, and I don’t think that it works on any level. This is easily the poorest track on the album.

The last track, “Nonchalant,” has a lot to do to make up for the previous track, but the excellent news is that this is superb and a fitting finale to the album. An excellent acoustic based track with great vocals and lyrics, a mandolin to the fore, and a subdued violin weaving a magical background riff. Just on the 4 minute mark, there is a change to a superb piano led melody until the mandolin reappears further on.

Overall the album certainly has many more highs than lows, but the lows are poor. Druckfarben has definitely shown that they are a a force to be reckoned with, but they will have to be more careful with their choice of direction. The plus points are easily picked up when there is a “classic” prog rock feel to the music, but as with many bands they are not content to simply stay in the “comfort zone,” and are trying to push the boundaries, something they should be commended on. Sometimes ideas will work but with others it is back to the drawing board. Druckfarben are off and running and certainly worth a listen.