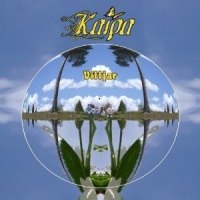 The band, Kaipa, are a little difficult to describe, and I have seen comments ranging from a prog folk rock fusion band to rock with undertones of the innermost depths of the ancient Swedish primeval forest. (The imagination of some people is immense!). This album, Vittjar, is the eleventh release from the band and with their roots all the way back into the mid-60’s, these are not young highflying prog dreamers, but seasoned professionals who like to dip their toes into uncharted territories but retain a fascination for the folklore of the past.

Kaipa currently is comprised of 6 members and this is expanded by the addition of another 2 special guests and they are, Hans Lundin (electric/acoustic keyboards), Per Nilsson (electric/acoustic guitars), Morgan Agen (drums), Jonas Reingold (electric basses), Paul Lundstrom (vocals) and Aleena Gibson (vocals) with Frederik Lindquist (recorders and whistles) and Elin Rubinsztein (violin).

Vittjar is an album comprising of 8 tracks, from the short closing track (“Second Distraction”) at just over 2 minutes to the epic third track, “Our Silent Ballroom Band” which halts the stopwatch at a jaw-dropping 22+ minutes.

“First Distraction” (3:03) is the opening track of the album with an interesting folky introduction which then burst into a heavy rhythm track all within the first 30 seconds and this then slowly builds with keyboards added. More acoustic guitars and recorders then bring the folky feeling back over the top of the bass and drums. Per Nilsson then gets to flex his muscles (and fingers) on electric guitar to great effect as the song moves to its sudden finale.

“Lightblue and Green” starts with a heavy guitar/bass/drums/keyboards intro and then moves into a very definite folky area, all acoustic guitars, recorders and beautiful clear vocals courtesy of Patrik Lundstrom. This is a terrific passage of music which is then changed when the electric instruments reappear and drive the song along in a very different direction. At around 4 minutes the vocals reappear but more powerful and rockier. The rhythm unit is excellent with Per Nilssons guitar weaving above them. He then again gets the opportunity to “let rip” which changes the feel of the track again but everything is so perfectly intertwined. Just after 7 minutes, the keyboards signal a slight change and there is the inkling of a return to the folky feel of the early part of the track. Subdued, excellent guitar work allows the song to flow wonderfully. Vocals reappear as do the recorders, although the sound retains a bit more “heaviness” and the distant vocal of Aleena Gibson floats in and out over the top. More excellent guitar work starts to drive the song towards its finale when it switches to acoustic again for a short time before Per Nilsson weaves the song towards the end – then a crashing sudden ending, which is just superb.

The epic “Our Silent Ballroom Band” (22:11), is simply majestic. There are not many bands that can produce music like this, which literally sucks you into the experiences and reflections that the vocalists are describing, all the while taking you on a journey that weaves here and there, this way and that, and ultimately leaves you as the song fades away in your ears with one over-riding thought..Superb! Initially a quiet start has the crystal clear voice of Aleena Gibson over acoustic guitars and flute/keyboard, but the power of the band builds and recedes constantly throughout the track as it sets images adrift in your mind. Hans Lundin (keyboards) and Per Nilsson (guitars) exhibit superb skills and the contrasting vocals of Aleena Gibson and Patrik Lundstrom and the recorders/violin of the guests adds to the imagery.

The title track, “Vittjar” (3:49) starts with a violin motif and then the vocals are surprising in that we are treated to a song with their native language…Swedish of course. The song retains its folky feel and although my Swedish is not fluent (yours might be of course) the language in no way detracts from the excellence of the song and highlights the violin playing of Elin Rubinsztein throughout. It’s simple, effective and, importantly, very catchy.

“Treasure House” (7:34) is another rooted in the folk area (not really the depths of the Swedish primeval forest…but close) which features amazingly simple guitar work from Mr. Nilsson complementing excellent vocals by Patrik Lundstrom. There is an amazingly catchy vocal interspersed with melodic subdued guitar riffs…simply a treasure of a track.

Track 6, “A Universe Of Tinyness” (7:24) has a harpsichord intro (well, a keyboard impersonating a harpsichord) behind Aleena Gibsons voice which can switch from quiet and gentle to very powerful and driving. The violin is again heavily featured. The lyrics again form a story which draws the listener in and at no point does the music do anything but complement the overall feeling that is being built. Yet another superbly crafted piece of music.

“The Crowded Hillsides” (10:33) is the penultimate track and brings together more of the superb skills of all members of the band and weaves again from out and out guitar laden riffs to the superb folksiness that Kaipa can integrate into their music, seemingly with ease. I have already aired this track and the feedback was excellent with the word stunning being used.and by people who had not previously heard anything by Kaipa.

“Second Distraction” (2.20) is a short burst of fantastic lead guitar, complemented by the bass, mysterious keyboard motifs here and there, and crisp clean explosive drumming. A worthy, if short, closing track.