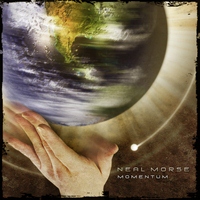 Just when you think an artist like Neal Morse has released a career defining album he turns around and releases one that is even better. With Momentum Morse has done that, again.

The title is fitting because Neal felt very strongly that he had more momentum now than ever before during his recording career and now was not the time to rest on his laurels but to seize the moment and continue writing and recording music. His blend of spiritual progressive rock has swept across the world like a musical tsunami bringing along anyone within range of its awesome powers.

Morse is in the prime of his career now recording solo albums and performing and recording with super group Transatlantic. His longtime friend and drummer extraordinaire Mike Portnoy has been along for the ride. It goes without saying that the drumming on this recording is outstanding. Also the ever present Randy George is on bass, the other half of the powerhouse rhythm section that sets Morse and his songs on fire. The guitar playing comes via the six strings of legendary Paul Gilbert and Brazilian Adson Sodré. The chemistry for this recording is undeniable and the end result is proof that it all worked.

The music is incredibly good on Momentum. What you get is spiritually infused electrifying prog rock and metal, basically everything you would expect and more. It comes at you like a smart bomb and just explodes from your speakers, making every word count with full impact. The nearly 34 minute suite “World Without End” is a bona fide prog rock magnum opus and some of Morse’s best work to date not to mention every other musician making contributions on another level, which separates them from so many others with profound emphasis. Morse finds inspiration and endless creative energy through his faith and we as the listeners are the fortunate recipients of that blessing.

I have to give the nod to the title track and “Smoke and Mirrors” as well, they are standouts that spotlight the precision instrumentation and power of Morse and his band. To be perfectly honest, there is not a moment of holding back on this recording and that includes not only the musicianship but the finely crafted lyrics behind all that energy and sheer musical force. There are some real heavy instrumental passages on this recording and I found it very pleasing as they offered both the complex, hard edged and mellower aspects of the genre. From the brute force of heavy metal at its peak to the more refined and syncopated complexities of keyboard laced prog, sprinklings of classical and jazz, this album covers the gamut of progressive music. Morse is no stranger to the elements of prog and what makes it tick.

With Momentum Neal Morse shows the world that not only is it befitting the title of the recording, he exemplifies the very meaning. When many artists his age are pulling in the reins, getting off the road and slowing down in every aspect of their careers, he seems to be hitting his stride with no end in sight. This is classic prog rock by one of the brightest stars of our generation.