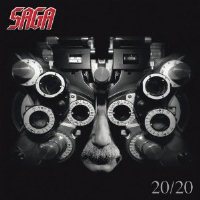 The Canadian Prog Rock band Saga has been around since 1977. They’ve had decent success through the years, despite disbanding, reuniting, continuing on under a different name and with two members, but came back for good in 1995. Since then they have kept going.

This album features the original lead singer, Michael Sadler, coming back to the band after a short hiatus. The Name 20/20 is supposed to represent this being their 20th release, but also having to do with keyboardist Jim Gilmour, who underwent eye surgery.

Strangely, it doesn’t feel like a modern record. It feels like the songs were written in the 1980’s but not brought forth until now, with different instrument sounds and top-notch recording technology covering it. But I like it. I get a feeling listening to it that this record is very true to what they write and what music naturally comes out of them.

If you’re looking for a serious metallic bite, there are better places to look. It’s got some toughness for sure (most notably on “One Of These Days”) but it’s more of a broad album and doesn’t want to be too tough or too tame. There’s also plenty of great musicianship from each of the members, but between Sadler’s return and Ian Crichton’s guitar shredding, they own the show. But for the most part this album is very balanced in terms of the talent displayed.

My favorite aspect of this album is that each song sounds different than the next or last. Oftentimes prog bands’ material, albeit complicated, can sound similar after awhile, even if there isn’t much similarity at all. That isn’t the case here. If you listened to the first minute of each song and then skipped to the next, it would sound like something fresh and different, not a continuation of the previous one. I’m glad they thought to do that.

This album is a return to form, in a way, for Saga. Sadler coming back definitely gave them new life and ideas for this album. It shows. My one picky little personal taste bit would be that they stick to 4/4 a bit much, and don’t throw in the odd 17/8 every so often. But that wouldn’t be who Saga is, and they’re doing just fine as they are.

Key Tracks: Anywhere You Wanna Go, One Of These Days, Show And Tell