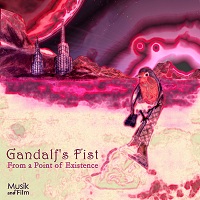 I always enjoy getting a chance to review a follow-up album by a band I reviewed previously. In this instance the band is British duo, Gandalf’s Fist, and the album is From a Point of Existence. Existence is the band’s follow-up to 2011’s Road to Darkness. Darkness was an epic, progressive rock concept album based around a re-imagining of The Wizard of Oz. It was an interesting idea that was a bit out there for casual listeners, but is this latest release more accessible or in the same vein?

As to be expected, From a Point of Existence is inspired by Tolkien novels to some extent. I’m not entirely sure how it all goes together, but it is also about an ice cream van operator named William and the theft of draconian business-magnate Sir Jason Drake’s personal wealth. Don’t ask me, check out the band’s website if you want to try and make sense of it all. Gandalf’s Fist brings you seven new tracks this go round, three of which clock in at over nine minutes of their psychedelic rock stylings.

From a Point of Existence still has the Pink Floyd/psychedelic vibe like its predecessor, but not as much. This album rocks more for me though. There are big riffs and solos, heavy beats and crashing cymbals. I enjoyed this more this go round, as I did the vocals. They can be creepy, breathy, and spacey, but they just worked more for me this time. I was also surprised that I did not grow tired of the songs that reach over 9 minutes (well over at times). It’s rare that they don’t seem to drag on, but the many changes kept them moving nicely so much that I didn’t really even notice. I didn’t really enjoy the synthesizers very much though, but they did add more of a futuristic dimension at times.

Overall I found From a Point of Existence to be a step in the right direction for Gandalf’s Fist. While still sticking to a similar style for the most part, they often improve on it. The concept’s behind their albums still remain interesting to say the least, but if it’s that’s how they find their inspiration then so be it. From a Point of Existence is also more accessible for a general audience. While you still get some lengthy prog rock jammers, you also get more hooks and even something of a single in “There and Back Again.” This go round Gandalf’s Fist stays true to themselves but also make some adjustments that should appeal to a larger audience. The end product is better for it.

Key Tracks: From a Point of Existence (Parts I-V), There and Back Again, Crestfallen