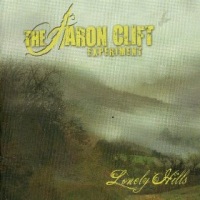 The Aaron Clift Experiment is a four piece band comprising Aaron Clift (Keyboards/Vocals), Jim Ragland (Guitars), Joe Green (Bass) and Joe Resnick (Drums). Aaron Clift himself started very early in music (at the age of 2) and was into formal musical education at 11. Although he did spend some years as a classical composer, he was drawn towards what he perceived as the “adrenalin rush” which was only available through the live audience participation in rock music. This led to songs being written back in 2007 which would ultimately appear on this, the debut album, Lonely Hills, by the band.

Think of bands such as Styx, Kansas, Genesis, Pink Floyd and not forgetting Jethro Tull (the band and not the man who invented the seed drill) and The Moody Blues, and then throw in a chunk of experimentation (no pun intended) and you get a sound that encompasses symphonic prog rock, hard rock, classic rock and also a little AOR. Not what you would refer to as “classic” prog rock but the music on Lonely Hills is certainly nearer that genre than some recent releases.

Unlike many prog albums, Lonely Hills contains several short tracks, but each of these is a little nugget of musical excellence .There are 10 tracks on the album with the shortest clocking in at just under 3 minutes (2:54), and the longest running just short of 10 minutes (9:38). Tracks 5-10 form an ambitious suite, “The Castaway Saga” which is an amazing inclusion on a debut album.

The first track, “Seven” (3:21) is an excellent starter to the album with great piano/drums and subdued guitar at the outset and a real change in pace within the first minute. Powerful clear vocals from Aaron soar over the music backbone of the track. Around the 2:30 mark, the track slows right down before climbing back up to the starting tempo. It is a short, snappy and instantly memorable track.

Track 2, “Arsonist Games” (3:21) starts with a guitar (Jim Ragland) which sets up a series of power chords behind the voice and keyboards and there are rhythm changes all within the first 1:30. The bass and drums supplied by Joe Green and Joe Resnick control the pace of the song throughout. Jim gets a chance to show his skills before the track returns to the original pace/melody. Another track…and we are only on the second track that has an instant hook to it.

The title track, “Lonely Hills” (3:52), follows with a gentle piano/vocal intro before the rest of the band appear but maintain the gentle pace which slowly builds with the keyboards becoming more apparent and leading into an “old school” keyboard passage. The track continues with the piano and voice again until the false stop is reached when the voice and the piano become much more plaintive as the track runs to its end.

“My Andalusian Lover,” (4:46) track 4 has a much more up tempo start and purrs along with the characteristic voice of Aaron until the whole track builds up around the 1:30 mark. Good guitar work by Jim and the chorus is very catchy with another nice hook .The track moves through phases, each seamlessly merging with the previous. This is the final “single” track with the rest of the album being the long linked suite.

“The Castaway Saga” whilst made up of six sections each merging into the next is best listened to as a complete entity, but I will try to deal with each individual section. “Shipwrecked” (Part 1) (6:35), starts the suite and we are immediately into a short atmospheric passage before the instruments enter and suggest that there is a problem (a storm to be exact), and the lyrics of Aaron paint the picture of what is happening over the music. Guitarist Jim is again to the forefront ably backed up by the “engine” of Joe G and Joe R. Around the halfway mark there is an excellent guitar/keyboard passage which slowly increases in intensity, together with thunder and waves, which completes the picture of the whole shipwreck. This leads into “The Shell” (Part 2), (6:24) which has a gentle harpsichord-like keyboard beginning with the excellent, clear vocals of Aaron again lyrically brilliant in enabling the listener to soak up the feeling of loss. Drum and keyboards take over forming a backdrop, with another memorable motif, to the vocals. The track continues in the plaintive/forlorn setting until there is a change in pace around 4 minutes, which sees the castaway “raging” against the situation, and then into an instrumental passage led by the superb work of Jim. The keyboards then bring the pace back down, reverting to the piano motif at the start as the track moves towards its finale. “Low Tide” (Part 3i) (2:54) again start with piano/vocals and Aaron’s lyrics painting the scene vividly. The piano work is excellent and the perfect accompaniment to Aaron’s voice. The next track, “Staring At Fruit Out Of Reach,” (Part3ii) (9.38) is the tour-de-force of the suite, commencing with keyboards and guitar, this is a much more up-tempo driving intro. Jim and Aaron share motifs above the musical foundations provided by the two Joes.  Aaron continues to present the story within his lyrics and keeps the listener in this imaginary world. Around the 5:30 minute mark, the pace again drops and becomes piano led, amply supported by the bass and drums. The guitar of Jim R weaves in and out and above the main theme and the track gently moves to its end point. The final part of Part 3 (iii), “High Tide,” (3:26) has a very different start which will catch the listener. Medieval-like guitar melts into Spanish style guitar with more powerful vocals from Aaron, and although the musical style seems at odds with what has gone before, it somehow works and grabs your attention. The final part of the suite, “Eye Of The Storm”  (Part 4) (6:16) brings us full circle back to the keyboard/vocal   beginning and then more instruments, including a flute, build into the mix and we are off on another part of this amazing journey. There are reappearances of earlier motifs bringing the epic towards its conclusion, again with superb guitar playing by Jim and the last part of the track includes the sound of waves.  This is a superb, mesmerizing piece of work, considering that it is the debut album from this band.

To sum up, these four musicians are very skilled in what they do, and as a unit, they perform superbly. The initial four tracks on the album, Lonely Hills, are all well-structured and have memorable passages, even on the first listen. ”The Castaway Saga” which completes the album is a massive undertaking and highlights the confidence that the band have in their work. At 30+minutes, this is without doubt an epic track and takes the listener on a journey that twists and turns and always has them gripped.  I think it is safe to say that this is their “magnum opus” and the rest of the album is a resounding success.