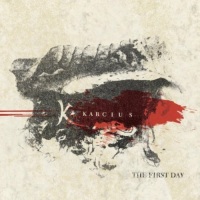 Karcius are a Canadian 4 piece band that seems to be stirring the waters of the progressive crossover genre. They embody into their music a combination of various genres to create the Karcius sound, and these include rock, pop, classical, jazz, ambient and African (I don’t think I missed any of the genres out). Initially formed eleven years ago in 2001 and comprising of Simon L’Esperance (guitars), Thomas Brodeur (drums), Mingan Sauriol (keyboards) and a later addition to the band in 2009, Sylvain Auclair (bass/vocals).

This album, The First Day, is the bands fourth album, following on from Episodes, released in 2008, and is the first Karcius album to feature the bass player, Sylvain Auclair. It is comprised of nine tracks, which seems to be the norm for many albums at this point in time. Lengths of the tracks vary from the short instrumental penultimate track, “Djoko” at a tad over 2 minutes, to the final track “Water,” clocking in at just over 8 minutes.

The aptly named opening track is the title track from the album “First Day” (5:49). This begins with a very atmospheric intro into vocals by Sylvain Auclair, with the percussion very evident and the voice subdued but powerful sounding.  A piano motif drifts in and out with a powerful rhythm unit driving the track along. Guitar from Simon L’Esperance and keyboards from Mingan Sauriol take center stage around the 2+ minute mark. Slightly distorted guitar drives along above the keyboard, with the drums and bass providing an excellent rhythmical backdrop and a good solid start to the album.

Track 2, “Hypnotic” (6:36), has a guitar/keyboard introduction but has much more of a relaxed, laid back, an almost late night feel to it. This is a very jazzy track with the relaxed vocals of Sylvain. Around the halfway mark in the track, the guitar/piano interplay is excellent with firstly the piano (Mingan) and then the guitar (Simon) taking the lead. There is a slightly grittier feel after the 5 minute mark and throughout, the drums (Thomas Brodeur) and bass (Sylvain) are excellent. Just before the ending, the track goes through a very sparse passage. The style of the track and the title do fit together very well.

“Rest My Head” (6:43), track 3, again has a gentle intro with guitar/keyboards and voice leading into an insistent drum rhythm as the track starts to build. Simon’s guitar work is to the fore again and the piano, with its little runs, is always there or thereabouts in the mix. Just prior to the 3 minute mark, the feel of the track becomes grittier again and the keyboards produce an excellent old style sound over the powerful rhythm engine. This transforms the song, which until that point was the least interesting thus far, but it is by no means a memorable piece of music.

The fourth track, “The Word” (6:27), starts out as a much heavier sounding piece of work, with guitars/drums/bass and lots of cymbal crashing and then slips into a gentle guitar/piano track with vocals until the track builds up a bit of speed. There is a sudden tempo change which I will admit, certainly doesn’t sound the smoothest change I’ve ever heard, and then back to the gentler sounds. The piano/drums/bass passage is very good and at around 4 minutes, the piano takes over with “strings” appearing and there is a bit more oomph to the track after this point, but there is a strange solo piano fadeout and unfortunately this isn’t a memorable track.

Number 10 (3:04) is in fact track number 5 and again possesses an atmospheric intro with the keyboards the main player. This is a dark atmospheric piano lead instrumental but unfortunately, it isn’t the most gripping track and just over three minutes is ample.

Track 6, “Why” (6:23), starts with a very distant John Lennon voice and “Give Peace A Chance” as a quiet intro before the drums and piano move in, which is certainly an interesting start to this track. Terrific bass/drums and Simons guitar weaves in and out. Harmonized vocals add to the interest of the track and at around the 3:30 minute point, the tempo changes and the guitar riffs hit in, but the vocals don’t seem to gel and are too far down in the mix. Around a minute later, the gentler style of the start of the track has reappeared. Excellent guitar and keyboards then appear, but there is still a feeling that the track is a little disjointed.

“Brother” (6:14), is the sixth track on the album and has an almost blues feel to it, with very soulful vocals from Sylvain, and the track does indeed stand out, but I fear, for the wrong reasons. The previous couple of tracks have not been too memorable and the change in style for this track is so different, that it is instantly more memorable. The guitar work is again in the excellent category, but the clear structure of the track seems to deteriorate into a melee after 5 minutes, before there is an acoustic guitar fadeout, which seems a strange ending to the track.

The penultimate track on the album, track 8, is called “Djoko” (2:24) and is a percussion based track with some distant African style singing as the track progresses. I feel that this is a strange track to include on the album as it doesn’t seem to fit in well with the rest of the album. I find this an odd little track.

The last track, track 9, is “Water” (8:15) and has a very up-tempo start with driving drums and bass, with the guitar and keyboards not far behind. The style of vocals from Sylvain again fit into the soulful mode and the song settles into a gentler pace, held together by the superb bass and crisp drumming of Sylvain and Thomas respectively. When the level of the track builds, it seems a bit overcooked and the sound becomes almost murky. The guitar lets rip around the 5 minute mark, leading the bass/drums in, with the keyboards coming in over the top and then the sound drops to allow a short acoustic moment before the whole track is cranked up again. The shifting tempos keep this track interesting and I think it is safe to say that the best has been kept for last.

All in all, I feel that this release, The First Day, is a bit of a mixed bag. There is some excellent playing in all areas of the group, but somehow the over-riding feeling at the conclusion of the album, even after several plays, is that there are highs and lows. My feeling is that the band seems to slip into a sort of “comfort zone” area every so often and the resulting sound is unfortunately too similar on some tracks. Having said that…when they hit the right spot, they are very good.