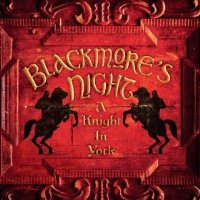 I saw Blackmore’s Night in May of 2011 perform live for the first time in Tarrytown, NY. It was everything and more than I could have possibly wished for in a live performance. Any music lover’s preference is the ability to attend a concert of one of their favorite acts and hear the music duplicated from studio sessions with some variances and a visual experience second to none. With Blackmore’s Night, I assure you that if you attend a concert you will not be disappointed. To start you must be fans of this type of music of course however there is such a wide array of styles incorporated with Blackmore’s unique sound that it does command a diverse listening base. I have heard it tagged as new age and alternate rock and some other things but rest assured you will never be able to put this music in a box and tuck it away in a corner. It is best described as progressive medieval folk rock.


So now we have another live performance committed to CD and DVD for the fans, A Knight In York, which is the latest release from Blackmore and his band of minstrels.  As a special bonus you get an absolutely stunning reproduction in Blu-ray with your choice of 5.1 surround sound. Not only is it heaven for audiophiles, it is a delight to the eyes; it touches all the senses and leaves you with a feeling of completeness. I can convincingly say without question that this performance is what I witnessed last year.

The band adds all the atmosphere and flavors that make it that medieval cauldron of rock and folk that has gained a huge following over the years. It also helps that the lead singer, Candice Night, is your wife, best friend, the mother of your child, and not to mention having the voice of angel. That about covers it all I would think for any legendary rock icon with the stature on one Mr. Ritchie Blackmore. Their worldly sound is rounded out with the help of Squire Malcom of Lumley (drums/percussion), Bard David of Larchmont (keyboards/vocals), Gypsy Rose (violins/background vocals), Earl Grey of Chimay (bass/rhythm guitar), who prances around like a sedated Gene Simmons, and the legendary Minstrel Albert who transported himself through a worm hole from another time and place taking care of the all-important Shawns and Bagpipes.

This is the complete package for Blackmore’s Night fans and it also includes a booklet with pictures. Basically the only thing that is missing is the lyrics to the tracks but you don’t need them because you can understand Candice Night when she sings. For those of you tired of hearing music with indistinguishable lyrics this is a slice of heaven. The songs covered on this performance are from their last two studio releases Secret Voyage and Autumn Sky including a spontaneous rendition of the Bee Gees “First of May.”  So there are treats throughout this special edition release and it well worth you hard earned dollars and I would consider getting this version opposed to the single CD.

Some of the highlights, in a performance literally filled with them, are the lead off track “Locked Within The Crystal Ball,” “World of Stone,” their classic “Fires at Midnight” and “Dance of the Darkness.” And don’t fret long time Blackmore, Rainbow and Deep Purple fans,  besides the mandolin, acoustic guitar and Hurdy-Gurdy, Ritchie pulls out the electric guitar often enough and goes on some runs to restate that he can still rock with all the rest of the six-string slingers young and old alike. If you were a Rainbow fan you knew that he was headed in this direction and now because of that change he has evolved once again and has an entirely new audience following him and his band worldwide. With the exception of longtime fans like myself that have enjoyed the ride with Ritchie right from the beginning to present day, this set is proof positive that one of the kings of rock is still alive and well, he just lives in a different universe now but man can he still play.

One of the better moments of the night is when their 1 year old daughter Autumn comes out on stage walking right over to Mom and getting in her arms as she sings. Ritchie not only has his own family now he keeps adding more to his ever growing fan base spreading the joy of ancient music combined with the new. This one is a real keeper so do not miss it.

Key Tracks: Locked Within The Crystal Ball, World of Stone, Fires At Midnight