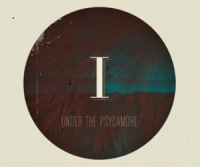 This band was a complete unknown to me when their debut cd  I  landed on my laptop. A quick piece of searching for information turned into a much more detailed search than I had thought, but I did glean some information. Under The Psycamore are a neo-progressive rock band hailing from Sweden. There are only two members of Under The Psycamore, Jonathan Grieff and Carl Blomqvist.

The debut album I, consists of eight songs with a running time of approx. 48 minutes. The shortest track is track 2, “Beyond The Fire Part 1” clocking in at 2:15 minutes and the longest track, “The Gatherer” running to 8:13 minutes.

As ever, I always feel that the opening track of an album is a very important track for setting how you tend to view the rest of the album. With this in mind, let’s get started with Track 1, “ The Owls (ANWTS)” (2:38) which is a relatively short starting track. There is a gentle acoustic guitar introduction, which is a very soothing relaxing piece of music, with the sound building very slowly until around the 2:00 minute mark when there is a complete change with bass/drums which continues to the end of the track. A track designed, I feel, to whet the appetite.

Track 2 and 3 are Parts 1 and 2 of “Beyond The Fire,” running for 2:15 and 5:31 minutes respectively and starts with a beautiful acoustic interplay on the guitars, with a definite “hook” to it. The bass and drums edge their way into the piece as it builds up with the voices deep in the mix, emerging as the track evolves into Part 2. This continues in an acoustic vein prior to the drums/bass and guitar joining in, and the “proper” vocals which have a distinctive breathy sound to them. The track then explodes with ferocity as the electric instruments and the drums move up several notches and the vocals become much harsher. This then reverts to the more genteel intro to the track with very sparse instrumentation and almost “scat” singing. The whole track is very atmospheric and the bass/drums/electric guitar start to build again but remain in the background and subdued. Slowly this changes to the harsher sound from earlier before returning to the gentler acoustic sound. Certainly reminds this reviewer of bands like, Porcupine Tree and Marillion.

“Celestial” (7:22), track 4 starts off with a much fuller sound, beautifully harmonized vocals, bass and drums, with a very quirky stop-start tempo. This leads into a bass led motif with the vocal harmonies continuing. A glorious guitar picks out a memorable melody over the top of the voices, before the track reverts to the acoustic setting again. There is a point where the song stops then starts up again and the gentle acoustic melody builds in intensity again as the song moves towards the coda.

Track 5, “The Gatherer” (8:13), starts with the trademark acoustic setting and a simple melody. An electric guitar takes the lead, but remains subdued with strings increasing in the background. This is terrific guitar playing, followed by an increasingly intense bass guitar, and harmonized vocals appear again. The backing builds and recedes constantly and the vocals take on an echo/slightly distorted sound. This whole sequence provides an almost Moroccan feel to the track before slowing into the acoustic setting with congas providing the rhythm. The intensity of the music increases as the track moves towards its finale.

“Amalthea” (7:48), track 6 begins with acoustic guitar layers merging into a wall of sound with a distorted electric guitar picking out a melody. Harmonized vocals again enter the fray and add another layer to the track. The track revolves through gentle acoustic passages to the harsher electric settings. This is a display of great musicianship from both members of the band.

The penultimate track, “Garmonbozia” (8:12) has a different bass melody intro with strumming acoustic guitars, slightly distorted vocals and this sparse instrumentation continues for a little while then the vocals clear and the sound takes on a heavier feel. Another terrific guitar motif over the vocals and the “wall of sound,” before a return to the sparse earlier setting and there is a swinging into and out of the heavier sounds as the track motors towards its finale.

“Remember Me” (6.59) and the final track on the album might be viewed as a plea from the band to the listener. An almost siren-like intro with harmonized vocals which bring to mind CSN and Y. The track veers from the gentle acoustic passages to the heavier electric passages with rapid time shifts but it all seems to work.

For a first album, this certainly promises a great future for the band. They certainly seem to have been influenced by a variety of bands including the previously mentioned Porcupine Tree and Marillion, and also, Yes, Tool, IQ and Pineapple Thief, but use this influence in a masterful manner to create a sound that encompasses the sound of these bands but is uniquely, Under The Psycamore.

Footnote:  Apparently, they were brought to the attention of Trey Gunn (King Crimson). He was so excited by the initial recordings of the band that he contacted them about working together with his label, 7D Media…and the rest, as they say, is history. Well it could be if further releases live up to the promise of I.


Key Tracks: Beyond The Fire (parts 1 and 2):The Gatherer: Remember Me
Jim “The Ancient One” Lawson-MuzikReviews.com Staff
October 22, 2012