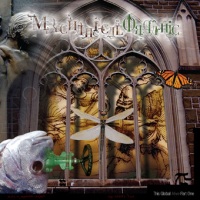 Mechanical Organic are an Australian progressive/experimental metal band and this album, This Global Hive (part 1) is their fifth release. As with all previous releases, the album is again a concept album. This time, the idea running through the album is “an exploration of the black awakening, satanic ritual abuse, the creation of satanic super soldiers, multiple personality disorder and demonic mind control programs used to ensure the coming chaos.”  So, all in all, a little bit removed from The Cape Crusader’s concept album “The Six Wives Of Henry VIII.”

The album itself, This Global Hive (part 1), comprises nine varying length tracks, with the shortest track, “Belief Inoculation,” the final track (2:15) and the longest track, track 5, “The Dark Ones Know,” running to a length normally referred to as epic (19:36).

So, a dark concept album by an experimental/progressive metal band means that I think I left my comfort zone away in the distance. With an open mind, I set out on a journey of exploration.

As ever, I always feel that the opening track of an album has a huge responsibility on its shoulders as the introduction to a new piece of work from a band. Track 1, which happens to have one of the longest titles I think I have reviewed, “Meek As A Dove Wise As A Serpent” (2:38) has a percussion/bass backing with a “radio broadcast” in the background and a vocal narrative over the top. The background sounds shift back and forth behind the narrative, which is setting the scene for the concept outlined earlier.  I appreciate that it is a “scene-setter,” but unfortunately it seems too long, even at just over 2 minutes.

There is a gentle intro to the second track “Artistic Atrocities” (7:05), with again some shifting background sounds before the wall of sound created by the guitars/bass and drums appear. There is a heavy guitar riffed melody which the vocal of David Bellion seems to be fighting with. There is a slight change in tempo prior to the “metronomic” drumming and then the guitarist gets the chance to shine. (Conny Dee) The wall of sound drops occasionally allowing a more melodic guitar playing  against a simple drum beat. There are some excellent guitar led passages with the rhythm engine pounding away. Keyboards swirl in and out of the background and this is definitely a powerhouse of a track.

“Intellectual Clones” (4:38) is the third track, starting with keyboards, bird sounds and bass grunts before the sound wall creeps in. The vocals definitely appear more settled into the mix on this track. Again the guitarist shows terrific skills and the track drives along with the bass/drums very tight and “beefy” behind everything. There are background voices from time to time, and with the variation in “heaviness” this track certainly holds the listener.

Up until this point there have been little bits of narration within the tracks which have not tended to be too intrusive, but this seems to change around this point with the narrative becoming increasingly annoying.

Track 5, “The Dark Ones Know” (19:36), is the longest track on the album by far and could be viewed as the “tour de force.” There are radio sounds and bass before the music starts to build and the narration commences. This time there appears to be a real discordancy between the guitar riffing and the narration. There is an interesting passage with “normal” vocals and a short guitar passage. The vocals tend to drawn out and show that David Bellion has a fair range to his talents. There are passages of “head down heavy riffing” contrasting with soaring guitar work. The musicianship on the track is excellent but the narration makes it a little disjointed. Around the 16 minute mark, the sound falls away to leave an almost sermon-like narration with keys/guitar in the background, all the way to the end. Terrific progressive metal is on show on this track, but the narration is too intrusive and breaks up the flow of the track, at least to this listener.

From this point onwards, I concentrated solely on the music of the final tracks and won’t dwell on the narration, but, rest assured, it is still there on each track.

There is another atmospheric start to the next track, number 6 “The Binding Memory” (5:46), which is a full blooded thunderous track with exquisite lead guitar over the heavy riffing/metronomic drumming. This one rarely takes time to breathe in its 5+ minutes.  A phone dialing tone heralds the start of track 7, “Street Corner Symphony” (6:07) which then continues with electric piano and into a “descending” riff which maintains the wall of sound before falling away to allow the strained vocals to soar. The heavy riffing machine returns and the track takes no prisoners on its way to the end. An engaged phone tone finishes the track off. This leads into the penultimate track, “Changing World” (6:40) which is straight into the heavy riffing before dropping back a little to let in the echo drenched vocals. There is also a piano very forward in the mix above the riffs. There is a rotation through some passages with excellent guitar work before the track completes.

The final track, “Belief Inoculation” (2:15) starts with a piano passage then emotive vocals and, all in all, is a very gentle melodic track as the concept reaches its conclusion.

As with all concept albums, they are normally not the sort of albums you can easily dip into and listen to an odd track or two, they are really the “all or nothing” variety. With that in mind, I found that this album while being musically excellent with soaring guitar work, heavy sustained riffing and metronomic drumming (not meant in a negative manner) together with a singer who has a fair range within his voice, somehow failed to miss the bullseye. That I feel can be put down to the ultimately intrusive narration which permeates through the tracks. Admittedly, to truly explain the concept contained within This Global Hive Pt 1, a certain amount of narration is necessary but I think that there could have been a better balance put in place.

Summing up, I would have to say that the album certainly has many more highs than lows, and it may be that other listeners will not feel the narration is too intrusive, and I would recommend This Global Hive Pt 1 as a very good example of experimental/progressive metal.