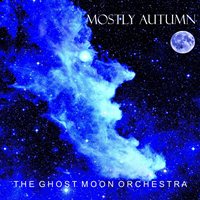 Olivia Sparnenn has settled in quite well since the exit of longtime lead vocalist Heather Findlay for the great progressive rock band Mostly Autumn. Spamenn paid her dues singing back up for Findlay and now she elegantly steps into the spotlight helping Mostly Autumn to continue without missing a step.

The dreamy vocals of Ms. Sparnenn were introduced at the front of the band on the excellent Go Well Diamond Heart. There was not that much of a difference in their approach and the Mostly Autumn trademark was still intact with some variances in direction from a musical standpoint. Now Ghost Moon Orchestra has arrived and the band has taken a decidedly heavier direction with several of the tracks on the album. The combination of leader Byran Josh and Olivia trading off vocal lines helps to solidify the heavier sounding tracks. The Pink Floyd influence will always be part of their foundation but it never gets to the point where they do not sound original and refreshing. I have heard nearly every album in their career including selections from that long line of recordings on a 3 disc retrospective Pass The Clock-1998-2008 Remastered. This collection is highly recommended and those of you interested in exploring the band from the beginning up to 2008 should consider it.

The theme of Ghost Moon Orchestra is based around; you guessed it, an orchestra, with two central tracks, The Devil and The Orchestra and the title track Ghost Moon Orchestra. It comes as no surprise that these are two of the most excellent outings on the album. What you get is a full attack of every band member’s capabilities in both songs. This band epitomizes the word progressive combining elements of guitar, keyboards, a rock solid rhythm section and vocals that always take you where the band wants you to go inside the music. Their innate ability to suck you right into the storyline is one their greatest assets.

The most noticeable factor in the way this band presents their songs is how each member compliments the other. The mix is always top notch and the musicianship archetypal of those that have their chops down to a science in their respective genre - in this instance progressive rock, one of the more difficult and unpredictable. A good example of that kind unpredictability is “Tennyson Mansion,” which starts with a surf like guitar line that weaves in and out throughout the track.  Then a Latin flavored acoustic guitar comes in to add more color and it suddenly shifts again when Olivia’s vocals are introduced, later to be joined by Josh.  It is one of the more atmospheric tracks that sweep you away.

In the past, as a Mostly Autumn fan you would know what to expect with every release however since they made the change at front of the band on vocals we have seen two recordings with entirely different approaches and atmospheres. It is exciting to know that the next album could be a total surprise. This is a solid release and once again they have done very well to satisfy their legion of listeners with a captivating recording filled with all the wonder and enchantments that progressive rock can offer.