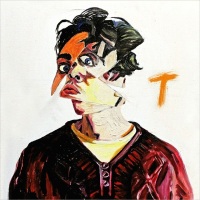 This was indeed an interesting and surprising CD (Jakob Juhkam T) to land in front of me this week for review. Not only was I unaware of the artist, Jacob Juhkam, it was not easy to find out much about the man himself. What little I could discover was that Jakob is an Estonian composer based in Tallinn and he is influenced by a certain Frank Zappa. He seems to possess the same outlook on his music, which shows considerable dramatic flair, with surprising time changes, interjections of unexpected instrumentation and abrupt changes of melody. The music itself is a melting pot of jazz, prog rock and classical genres and the best way to describe the result is to compare the music to that of film soundtrack material minus the film (if that makes any sense?).

This is an eleven track CD, with the tracks running from the very short final track, “Vaija/Out” (1:53) to the longest track, “Dorpati Katustel/On The Rooftops  Of  Dorpati” (6.38) which is the second track of the album.

The starting track to the album, T, is “Sisse/In” (2:18) and begins with a gentle acoustic guitar intro, followed by a simple synthesizer motif. This is then picked up by a piano and the keyboards build up in the background by 1:30 minute mark. Synthesizers play to the fadeout. A very interesting short starting track designed to make you want to hear more of what is on offer.

Track 2, the longest track, is “Dorpati Katustel/On The Rooftops Of Dorpati” (6:38) and again starts with a simple acoustic guitar and keyboards build up behind the melody. There is a sudden change to a clapping/chanting sequence and then the keyboards build up further in intensity and you become aware of the bass/drums having appeared as well. The tempo then changes back to the acoustic guitar and a choral chant behind the theme is superseded by another clapping passage and tempo change. A keyboard melody takes over around the 3:15 minute mark and creates images (in my mind) of a multitude of films. Synths flit in and out of the background and the whole thing merges into a swirling wall of sound before again settling into a very “filmy” passage which takes the track out.

Next up is  “Hr Vincent/Mr Vincent” (4:09) and features a couple of guest musicians, Lauri Ahone
(Marimba) and Hans Kurvits (drums). A synth intro gently builds with the drums and marimba taking over to drive the track along. The sound has a sweeping feel to it as it swirls back and forth before there is a tempo change which leads into an almost “fairground” passage prior to the return of the synths just before 3:00 minute mark which features another time change. The synth sounds build the melody up with varying time changes as the track ends.

The fourth track,” Etuud/Etude” (3:55) has Hans Kurvits (drums) again guesting and has a piano intro which gives a very distinctive jazzy feel to the proceedings. Images created by the tinkling piano are of leaves gently blowing in the breeze as it enters a terrific musical passage. The feeling of “soundtrack” music is very obvious with this track.

Tracks 5, 6 and 7 are “Mandelbrot/Mandelbrot” (2:24), “Vaelase Kook/Enemy’s Kitchen” (5:37) and “Raijin/Raijin” (2:09) respectively. Synth intro to set the scene with track 5, which is almost a white noise atmosphere with bass notes weaving in and out of the mix. There is a slight change towards the end of the track as the sound crisps up a bit before fading. Track 6 has a trio of brass guest musicians, Tanel Koho (alto sax), Roland Mallo (tenor sax) and Mikhel Kallip (trumpet). There is a jerky percussion start leading into a sweeping piano passage almost creating a sound wall, building up with piano/percussion and synths. The brass instruments make themselves heard producing another very jazzy feel and the whole track is the most up-tempo so far. There is a lot going on in this track and then it all drops away to leave a piano outro. Seventh track starts with a percussion/bass intro then a choral background with synths picking out a melody away in the distance which gives way to an almost oriental sounding passage. Synth runs drive the track along, and all in all, it is a very melodic piece.

“Hulkuri Samba/Samba Of A Hobo” (3:52) and “Juhtam/The Case” (4:57) are tracks 8 and 9, the former starting with the acoustic guitar, together with odd beeps in the background, before the synths pick up the melody and play along with the guitar. Images conjured up with this track are all suggesting driving in the mountains. Track 9 I found to be the “black sheep” of this collection, as it has a slightly discordant sound to it from the start. There is a guest musician, Silver Sepp (clarinet), and Hans Kurvits (drums) appears again. A very gently jazz influenced track with a variety of passages picked up by the keys/synths behind the clarinet, but as it progresses it lapses into an almost free-form jazz as the track moves to the climax.

The penultimate track, “Amatsooni Kaebelaul/Amazon’s Lament” (4:39) is a very low key affair with bass/drums and synths before the piano takes over the melody. They are quickly replaced by the synths return and again and there is the feeling of discordancy for a moment or two before an Eastern feeling takes over. There is a tempo change and the sound again builds with the synths to the fore.

The final track, “Vaija/Out” (1:53) is a very different track to all that have gone before. Strumming guitar with a whistled melody over the top, which is very strangely haunting, then a gentle fade out with a few synth beeps.

This is a very interesting album and also a very refreshing one. All of the tracks could be taken from film soundtracks as they all, at times, can conjure up images from films that the listener will have seen. It is almost like a series of film soundtrack material for films that have yet to be made. As a debut album this is very good, the musicianship is excellent and the melodies are memorable after only one/two plays.

I stated at the outset that I could find very little information about Jakob Juhkam, but with this album out in the public arena, I think that there will be much more information appearing about the artist and I certainly look forward to hearing where he goes from this debut. T is a very worthwhile purchase which will constantly get dipped into when you want to relax and let your mind go off on a journey where images are vividly “painted” in aural colors.