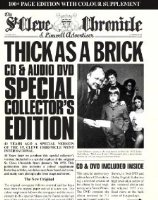 Thick As A Brick, first released in 1971, is a classic progressive rock recording by Jethro Tull. As the years pass its relevance and legend continue to grow. The band’s founder and leader Ian Anderson has said, implied or interjected comments into conversations over the years pointing to the fact that it was not a progressive recording. As any good prog fan knows (as well as Anderson) this is indeed a progressive rock album and a widely known masterpiece of the genre.

This special 40th Anniversary edition comes in a book format with plenty of information, interviews and stories about the session and it includes 1 CD, the original version of the album, and 1 DVD that offers several different formats for your listening pleasure in part one (or side one) clocking in at 22:45 and part two (or side two) ticking off at the 21:07 mark, giving us a grand total of 43:52 of pure prog pretentiousness at its very best. It was intended and is one continuous song and the band most definitely succeeded in producing one of the more popular forms of the genre.   The DVD is a marvel of sound reengineered by Steven Wilson. It contains a 5.1 surround sound mix (in DTS and Dolby Digital), the new stereo mix in high resolution, and the original stereo mix in high resolution. The album was also rereleased on vinyl for all of your collectors and those that still appreciate the LP format.

I listened to every version on the DVD and “really didn’t mind sitting this one out.” As expected some great things come about throughout the listen. Wilson is a musical genius in every sense of the word and Ian is quite aware of this and I am sure every succeeding anniversary edition that is released will be handled by his knowing hands. He also did a splendid job with the lavish Aqualung 40th Anniversary Box Set which I also had the distinct pleasure of covering. If you watch the DVD on your computer as the music is playing or on your home theater you will see the book in front of you and the pages turning every few minutes however it is a bit easier on the eyes to read direct from the physical packaging. The book format gives full attention to the original intention of the newspaper The St. Cleve Chronicle, which adorned the cover of the original album. There are some pretty funny titles in the St. Cleve like “Fly High With Aunt Molly’s Recipe” and “Council Is Wound Up.” It may be the first time many listeners really paid attention to the all of text provided in the fictitious rag (including me).

TAAB never becomes monotonous, in fact it is forever in a musical flux and quite unlike anything I have ever heard. That is what makes it such a joy to take in all in one sitting.  Considering the band was faced with the daunting task of trying to keep up with momentum of the brilliant and groundbreaking Aqualung, they fared quite well. This was no easy task mind you and as we know now they were able overcome any and all barriers to continuing their successful run and in the same instance their audience grew more with this very unique offering. One factor that really drove this recording along was the combination of Ian’s flute and John Evan’s outstanding keyboards. This does not take away anything from the rest of the accomplished musicianship however after many listens over the years and most recently every single version provided in this set, it becomes obvious that these two instruments give it the unusual and most appealing atmosphere and that classical/world influence that invited the plethora of other instruments to join in completing each passage with an expertise rarely accomplished by any other band since (Mike Oldfield’s Tubular Bells comes to mind).

What else can you say after a band provides a session such as this? As Ian sings “Vote superman for President” it makes you stop for a moment and wonder why he did not hold that title in 1972 after producing this amazing work. What may be even more of a spectacle is to catch Ian and his band performing the entire album live along with TAAB2. It would be an amazing show to witness.