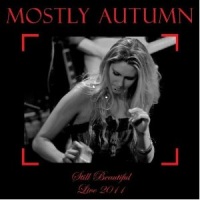 Still Beautiful Live 2011 is the third live cd set from the band, Mostly Autumn, in three years, which could be taken as an indicator that followers of bands appreciate a historical record (no pun intended) of major tours. The significance of this live set, is that it is the first to feature Olivia Sparnenn, previously the backing vocalist as the lead vocalist, taking over the duties and position vacated by Heather Findlay.

I will be very upfront here and state that I am not easily convinced about the merits of live albums, as I feel they don’t always work. Bands that have masses of followers based on studio releases, may also be superb live performers, but there are cases when the magic of a live performance does not translate well to a recorded version. So, how does this 2 CD set fit into this scenario? Let’s get started and find out.

There are 19 tracks on this double CD, Still Beautiful Live 2011, with disc 1 the shorter of the two, comprising 8 tracks (52:20) and disc 2 containing the other 11 tracks (68:39). The newest studio album prior to the tour, Go Well Diamond Heart, provides 8 of the 19 tracks and an older album, Passengers, contributes another 5 tracks and those albums form the bulk of the live recording.

The set starts off with “Hold The Sun” (5:46) with a piano passage before the rhythm engine crashes into proceedings and the superb voice of Olivia carries the track along until joined by Bryan on vocals. The song has a very distinctive hook, shows Bryan to be a very good guitarist, and is an excellent start to the album.

The following  four tracks, “Deep In Borrowdale” (6:06), “Something Better” (3:39), “Forever Young” (4:58), and “Ice” (8:23) are all taken from the Go Well Diamond Heart album, as indeed, is the opening track itself. Ice (8.23) is a slower starting track to those that have gone before with a relaxed drum/bass introduction and a gentle guitar motif over the top. Bryan leads the vocals and Olivia takes over before handing it back to Bryan. Both vocalists have powerful voices although they are subdued to fit the music on this track. Around the halfway point, a gentle piano motif takes over and the sound starts to build with superb guitar work weaving in over the top of the keyboards. Cue the bass/drums becoming more insistent and the track livens up quickly and drives along with the male vocals and lead guitar catching your attention.

Track 6, “The Dark Before The Dawn” (4:41), continues the pace set with the ending of the previous track and again highlights the benefits of having two excellent vocalists who provide the perfect complement to each other .The flute of Anne-Marie plays a prominent part.

The last two tracks on this first disc are both  longer tracks. “The Last Climb” (7:39) again sees a more relaxed introduction which slowly builds and the haunting flute of Anne-Marie again plays a prominent part and is the main instrument from about 1.5 minutes until the lead guitar takes over around the 4 minute mark. The guitar then drives the song along until about 30 seconds prior to finishing when the wall of sound drops and a peace descends for the guitar to gently take the track out.

The final track of disc 1 is track 8, “Questioning Eyes” (11:04) and highlights the vocal prowess of Olivia, initially backed by a simple piano passage which merges into majestic passages of music and then returns to Olivia/piano. At 6 minutes, the last passage of solo piano/Olivia slows down and ultimately leaves the piano to pick up the pace around 7 min and then the amazing guitar comes in and soars, glides and dips as it moves to its finale just after 11 minutes. This is a superb track to end the first half of the show.

Disc 2 starts with the longest track of the set, “Heroes Never Die” (12:22). There is a keyboard start with an almost melancholy, plaintive lead guitar picking out a melody over the top, which is an amazingly atmospheric start to the track and immediately recalls a similarity to Pink Floyd. Some superb guitar work leads into a terrific vocal performance by Bryan and Olivia before there is a change of pace within the song, but retaining the plaintive sound. Around the 5 minute mark, the sound fills out and then returns to the solo voice of Bryan then the sound builds up again with Olivia rejoining in on the vocals. The vocals fade out after 7.5 minutes and then there is a blistering guitar driven wave of sound to the finale. This certainly showcases the amazing lead guitar work…a sensational track to start the second part of the CD.

Track 2, “Distant Train” (4:55), has a magnificent guitar riff in a more relaxed setting for this instrumental. There is a change of pace around 2 minutes when the flute of Anne-Marie joins in, swirling around. The whole track gently builds in intensity and there is more exquisite guitar playing in the second half of this track. The third track, “Answer The Question” (4:39) has an up-tempo guitar riff behind the male voice which is backed up through the song by both voices of Olivia and Anne-Marie. “Caught In A Fold” (3:39) is the fourth track and the third in succession to be taken from the Passengers album. This is a female voiced intro over a chunky rhythm with Anne-Marie’s flute floating here and there within the song.

“Nowhere To Hide” (4:22) is next up and is an example of Mostly Autumn’s earlier work. This is another rocker with terrific sound from the rhythm engine of the band and Bryan’s voice ringing out clear over the top. The vocal is again augmented by both the ladies voices. The title track from the album “Go Well Diamond Heart” (6:22) follows and has a very different atmospheric start before Olivia’s voice enters and again, the song highlights the spot-on harmonies the band can produce. Another title track follows, “Passengers” (5:53) and “First Thought” (4:41) from the same album, both of which demonstrate the range that the band can cover with the first of these tracks a slow guitar/piano start before Olivia appears and the second track, while again highlighting the superb vocals, shows amazing guitar playing and terrific melodies.

The penultimate track, “Evergreen” (8:32) is taken from the album Spirit Of Autumn Passed and starts with a gentle acoustic introduction and then the ethereal keyboards enter in the background. The clear powerful vocals of Olivia move the song along and produce a truly captivating 8+ minutes.

Finally, the climax of the 2 CD set is “And When The War Is Over…” (8:07) again taken from  Go Well Diamond Heart and this has a keyboard start with a beautifully picked out guitar motif and then the voice eases into the mix, along with the drum and bass. A very melancholic sounding track with the phrasing and timbre of Bryan’s vocal at times recalling a younger Leonard Cohen. This is a superbly building song with blistering guitar work pushing the track along.  This was an excellent choice of track to end the concert on.

So, at this point, the $64,000 question is, “How does this CD stand in this reviewers eyes (and probably, ears)?” This is certainly a very well put together live album, showcasing the skills of all the musicians involved and with extremely good sound recording, thus making this an excellent addition for any follower of Mostly Autumn. I also have to admit that this CD set has shown me that live albums can, and do, work.

Indeed, I feel that as a starting point for “getting into” this band, this set is an excellent way of doing just that. It gives the listener a great insight into what the band  are about and a selection of old/new material all superbly played and, for this listener, the curtailing of minutes of cheering and yelling after each track merely enhances the listening experience. A very enjoyable 2 hours of excellently played music.

Key Tracks: The Last Climb, Evergreen, And When The War Is Over….

Jim “The Ancient One” Lawson-MuzikReviews.com. Staff