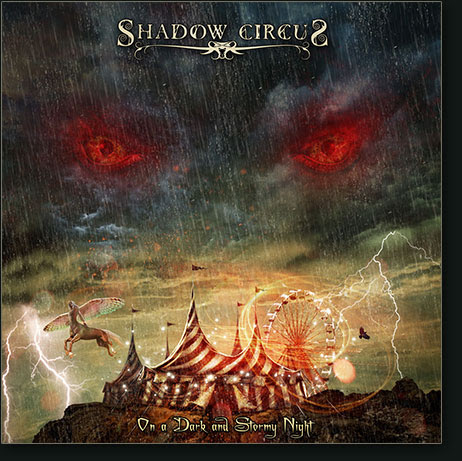 New release due 12/18 titled On A Dark And Stormy Night is a progressive rock concept album inspired by Madeleine L'Engle's classic fantasy/science fiction masterpiece, A Wrinkle in Time.

Shadow Circus was formed in 2006 in New Jersey when guitarist/keyboardist John Fontana set out to record demos to use as a calling card for session gigs. When the music caught the ear of vocalist David Bobick, he insisted that the music be fully realized with a complete band. With John's background in classical and progressive, and Dave's degree in musical theater, the two set out to form a unique band that would be just as rocking as it would be progressive, and embrace the aspect of entertaining live performance that they felt had been lost since the genre's heyday in the 70's. The band's name and first song was inspired by Ray Bradbury's Something Wicked This Way Comes, which would be the first of many literary references in their work, and Shadow Circus was born.

In 2007, the band released their debut, Welcome to the Freakroom, which was met with accolades from critics and fans alike. Featuring songs such as the aforementioned eponymous track, and "Journey of Everyman", a 12-minute opus inspired by the epic fantasy novel The Talisman, the band quickly established themselves in the international prog community as a unique new group, with a distinctly symphonic and rocking sound.

The band immediately went back into the studio to begin work on the follow-up. More than two years in the making, Whispers and Screams, released in late 2009, features the ambitious 34-minute suite "Project Blue", inspired by the Stephen King's horror classic, The Stand. This release sees the band reaching ambitious new heights compositionally, with critical praise from the prog community, and an exponentially growing fan base.

With their lineup completed by the addition of keyboardist David Silver, drummer Jason Brower and the return of their original bassist Matt Masek, Shadow Circus has now released their third and most ambitious CD, On a Dark and Stormy Night. Once again drawing upon literary inspiration, the new release is a concept album inspired by Madeleine L'Engle's classic fantasy novel, A Wrinkle in Time.