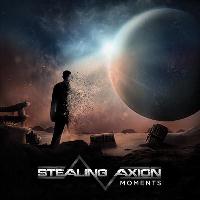 The band Stealing Axion offers up a curious musical fusion. On the one hand, with its sometimes rough lead vocals, it sounds like a modern heavy metal band. However, musically, this group’s instrumental approach is far more in line with a progressive rock band. In some cases, the vocals alternate between hard rock singing, and smooth, progressive vocalizing. Furthermore, Phil Willmarth’s vibrating bass line during “Everything or Nothing” sounds like something out of a Korn song, yet the rest of the track isn’t anything like that Bakersfield metal icon.

Moments is this Pacific Northwest quartet’s first album, and it truly stands out from the musical pack. After forming in 2009 and self-recording an EP in 2010, this act has come a long way as Moments is a very professional sounding album. The guitar work on “47 Days Later,” in particular, is speedy, yet not in a showing off sort of way. The music these four players create together has grandeur to it that you just don’t usually hear in typical hard rock music. It’s as though they dearly love heavy metal, yet they’re also far too ambitious to merely crank out monster metal riffs.

Perhaps what separates Stealing Axion’s music from typical progressive rock is the fact that there are no synths or keyboard parts included on this disc. Instead, all of these sounds are created with the standard hard rock elements of guitar, bass and drums. The guitar solo on “The Unwanted Gift,” with its slightly Spanish guitar feel, is especially enjoyable. The song’s vocal part is a duet, of sorts, between the harsh and smooth singing. These singers do not sound like they’re competing, however. Rather, it’s as though they’re revealing two sides of the same coin.

Chances are good you won’t hear an album much like Stealing Axion’s Moments in a long time, so if you’re tired of the same old thing, this fascinating release is something fresh and new.
4/5 Stars

Key Tracks: “47 Days Later,” “Unwanted Gift,” “Everything or Nothing”

Free Music Player for Myspace at ReverbNation.com
By Keith "MuzikMan" Hannaleck at December 15, 2012