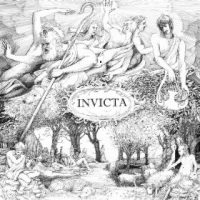 The Enid are one of those bands that fitted neatly into the box in my head, labeled as  “Have heard of the band, but never heard the band.” That summed up my contact with The Enid until the point that Invicta (the new album) dropped through my letterbox for me to review. My thanks go to Joe Payne, from the band, for finally introducing me to the stunningly superb, The Enid.

Formed back in the mid-seventies, the band have undergone a musical evolution since their inception and there have been large numbers of skilled musicians coming and going (and sometimes, coming back) into and out of the band.

It is very difficult to try to give an overview of the music of The Enid, and they themselves state (on the website) that their music is “free from constraints of template rock/pop where rhythm, harmony and melody are invariably dictated by the traditions, prejudices and limitations associated with style.”

Invicta, I may as well state at the outset, is a superbly crafted album, which indeed, does not fit into any neatly labeled box, but is a 50+ minute lesson in the production of excellence.

“Anthropy” (1:03), opens the album and is a very obvious “scene setter” track with a gentle choir style build up for about half the time, then a booming crescendo of sound hits before dying away again to lead into “One of the Many” (10:22) This is an almost pastoral, classical introduction into the track, then into Robert John Godfrey’s beautiful piano passage, just before the appearance of a very distinctive voice provides terrific vocals. At this point I was desperately checking the album information to see if there was a female guest vocalist, but indeed, the voice belongs to Joe Payne, and a superb falsetto voice it is. The track continues in a gentle flowing manner with piano, orchestral sounds and that stunning voice. There are subtle shifts within the track with other instruments appearing and carrying the track on. The whole sound becomes very ethereal and church-like with more voices swelling the sound before the solo voice of Joe takes over and returns to the earlier theme. Strings pick up the melody as the track moves to another change nearing the 8 minute mark when drums and guitar mark their appearance and Joe’s voice drops down the range from falsetto to “normal”. This changes the track significantly before the choral voices and sounds return to take the track out, with what can only be described as bombastic bursts leading into a terrific “church organ” finale. A simply stunning track which makes the listener wonder what can follow on from this point.

Track 3, “Who Created Me” (5:39) starts in a manner not unlike a musical theatre production, hugely dramatic with simple unobtrusive instrumentation behind the voice which ebbs and flows to create the dramatic effect before morphing into a more regular bit of rock music with a tremendously powerful backing prior to returning to the original motif. The track undergoes another change around the 4 minute mark before Robert John Godfrey’s piano shines and Joe’s voice powers through, to be replaced a minute later by the appearance of guitars which take the track towards the coda, dropping just in enough time to allow a return to the original theme which fades out quickly
.
Country sounds, bird calls, what appears to be a carnival in progress and a simple chiming church bell  heralds the start of the fourth track, “Execution Mob” (4:05). The vocals are very different on this track with multiple voices harmonizing. The guitars and drums are much more to the fore, with again, another very simple melody which continues on through the track, until fading out to the returning sound of the church bell. A very atmospheric track which merges into track 5, “Witch Hunt” (6:36), which itself is an intensely dramatic piece of music which always seems to possess a sense of urgency. The voices add to the overall dramatic effect and the superbly muted guitar riff stands out as the voices start to build up the tension. Around the 2:15 minute mark the voices “explode” with urgency to suddenly up the tension and the track takes on a different flowing pace. The guitars are back in about 4 minutes, fitting in behind the vocals before the band are given the chance to drive the track along. The guitars over the top of the voices are simply superb and the multi harmonizing voices carry the tension in the track to the end. This is a tremendously powerful track from start to finish.

Up next is “Heaven’s Gate” (9:09) which is an instrumental. This starts very slowly and gently with the synthesizer of Robert John Godfrey burbling away and the sound builds with the synthesizer holding everything together. A long introduction to the track until about the 2:20 minute mark when orchestral sounds appear and there is another simple melody on the piano. The orchestral sound continues to build until there is a simply stunning passage of synthesizers and guitars/strings, which fades and then returns. Changing themes maintains the interest and around the 6:30 minute mark there is a very atmospheric passage which returns to the earlier motif and suddenly, the orchestral sound/guitar and synthesizer returns around 7:45 minutes and the track slowly fades to a beautifully played piano passage.

“Leviticus”, (6:02), is another synthesizer driven track with great vocals from Joe and additional vocals backing up. There is a simple, yet amazingly beautiful, melody which builds with Joe’s powerful voice.  At about 2 minutes, it is a “full-blooded” track with guitar, drums and bass that moves along, catching the listener with its “hooks.” This is a superbly structured track with powerful vocals and driving guitar all perfectly intertwined. The track ebbs and flows and “sucks” the listener in. I found this track to be the most immediately accessible on the first play of the album. There is also an exquisitely gentle fadeout to the track.

The penultimate track, “Villain of Science” (5:03) reminds me initially of the type of music you might have behind a scene in a silent movie. The track builds for 30 seconds before the vocals enter and this has a very musical theatre feel to it. Great guitar appears around 1:30 minutes and drives the track along then drops to let the vocals set the scene. Drums and guitar float in and out behind the vocals and at 3:00 minutes, then the full power of the track is unleashed, with a wall of sound, which is both dramatic and atmospheric. There is a superb guitar solo from Jason which drops to let Joe’s plaintive voice take the track out.

“The Whispering” (4:22), the final track, has a glorious orchestral start leading into choral vocals and then Joe’s falsetto voice comes over the top of the “whispered” vocals.  The whole feeling of this track is of peacefulness and after the atmospheric and dramatic content of the previous tracks; this is the perfect ending to a sublime album.

This is an absolute stunner of an album, which highlights what The Enid are all about - magnificent  music which cannot easily be pigeonholed for the “average” listener to digest. The Enid’s musical uniqueness must be the bands most powerful tool.

My initial feeling about Invicta after the first hearing was difficult to describe. I was not “blown away” by it, despite the glowing comments that seemed to flood the web. By the third listen, I had reached the “jaw-dropping appreciation stage.” There are few albums over the years, and I mean many, many years, which have made me use the description of perfection, but this album, Invicta, is one of them.

My simple advice is to buy it and appreciate perfection. The band should be immense, but seem to have more of a cult following and I think that the time has come for the rest of the world to discover The Enid.

Key Tracks: One And The Many, Heaven’s Gate, Leviticus