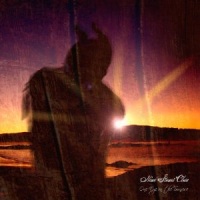 Nine Stones Close was conceived in 2008 as a solo project by Adrian Jones. He independently released the first album, St Lo, to critical acclaim and this led to a follow up, released in 2010, Traces. This was an album made with a “proper” band comprising, Adrian Jones (guitars), Brendan Eyre (keyboards), Marc Atkinson (vocals) and Neil Quarrell (drums). This new release. One Eye On The Sunrise, from the band shows further changes to the members of the group. Former members Brendan and Marc rejoin Adrian, and they are joined by Peter Vink (bass) and Pieter Van Hoorn (drums).

Just before starting the review, it is also worth mentioning the stunning artwork for the album, carried out by Antonio Seijas.

One Eye On The Sunrise is a 10 track album with tracks varying in length from the short track 10, “Sunset” which lasts for 1:28 minutes, to the penultimate track, “Frozen Moment” which stops the clock at 13:34. In total, the album has a running time just short of 60 minutes.

Opening the album we have “Faceless Angel” (2:55) which begins with some sounds of static, chimes, a radio voice and mellotron which all contribute to the build-up before slightly distorted guitars take on the melody at a slow pace. The feeling is that this opening track is reminiscent of the sort of atmospherics that Pink Floyd was so good at. After superb guitar work by Adrian, the track fades from around the 2:30ish minute mark, to the gentle chimes that started the track. An interesting taster for the rest of the album and leaves the listener eager to hear more.

“A Secret” (5:33), the second track starts with a “cleaner” guitar sound, soon joined by the superbly emotive voice of Marc Atkinson. Sparse but so elegant in its execution, the listener becomes quickly immersed in the music/vocals. Just before the 1 minute mark there is a terrific guitar riff behind Marc’s voice before returning back to the sparseness of the verse prior to the amazing guitar returning at the refrain. This is a simply a beautiful constructed song which “opens out” with bass/drums, Marc’s voice and that killer guitar in the hands of Adrian. About 1 minute from the end, the track drops in volume and intensity as Marc’s voice takes the song to the end.

The third track, “Janus” (5:46) is an instrumental with a synthesizer introduction and superb guitar picking up a melody augmented by the drums. The guitar repeats the same riff allowing the other instruments to weave in and out. About 2:30 minutes, the song slips back a bit to allow the piano to pick out a truly wonderful passage and then the driving guitar returns, together with a distinctive Spanish-style guitar well forward in the mix, as the simply gorgeous instrumental fades out.

Track 4, “…….and dream of sleep” (1:52) is a gentle acoustic guitar based piece of work, which although short, is excellent. This leads onto the title track, “One Eye On The Sunrise” (12:08) which is one of the two tracks clocking in at over the 10+ minute mark and allows the emotion and intensity of the music and the vocals to really build. The introduction is a quiet acoustic guitar with a cello playing behind the melody and then Marc’s vocals enter, quietly, to fit in with the guitar.  Then a superbly atmospheric introduction with a piano appears around the 1:30 minute point. By the 2 minute mark, there is the inkling of the building up of the intensity with the cello seeming to deepen in sound. A minute later, the track “explodes” with a genuinely heavy guitar riff and the vocals take on a more edgy feel. The track has now changed into a full band workout but just as suddenly dips and then soars back. The organ sound seems to come from deep within the ground and there is terrific drum/bass work and that sublime guitar riff. The track then moves into a very rock orientated passage and, believe it or not, we are only at the halfway point in the track. I detected a little hint of the Led Zeppelin style sound. At the 6:30 minute point, the sound drops, the acoustic guitar returns, and a violin (I think) and the sound becomes very ethereal. The vocals are very low in the mix, adding to the atmosphere and the whole piece seems to be more chilling until the guitar/voice again changes around the 9 minute mark. The cello builds behind the voice suggesting another impending surge in sound. This builds nicely and the heavy riff and the rest of the band return again. Adrian again shows superb guitar work and the band then drive the intensity along till the finish. A stunning track which demonstrates the skill of all the musicians involved.

“Eos”, (2:39), track 6 again starts with a clean crisp guitar passage and then the superbly evocative vocals take over. Adrian contributes some Pink Floyd/David Gilmour style guitar, and by that I mean, dreamy and entrancing. This leads neatly into the following track, “The Weight” (9:51) and Adrian’s guitar wails noisily to take us into the track. This high level passage drops at the 1 minute mark to let Marc’s voice take the track onwards. Again there is a sparse accompaniment of instruments with the keyboards swirling around in the background. The sound fills out again around the 2 minute point with the vocals becoming more powerful and forceful. There is then another dip into sparseness to give depth and power to the lyrics. This track is tremendously atmospheric and begins to build up again after the halfway point. The swirling keyboards lend an ethereal feeling to the track. The gentle vocals and acoustic guitar slowly build before Adrian’s guitar soars over the top in a crescendo of sound, then there is a dip before Adrian is “let loose” again. This is one of those tracks that continue to build in its intensity with repeated plays. The sound drops again just prior to 9 minutes and there is a return to the sparseness complementing the sense of loss that Marc’s voice can invoke.

Beautiful guitar work heralds track 8, “The Distance” (4:54), and the superb vocals paint the perfect picture of loss, with the instrumentation complementing this scene. The pace of the song is slower and almost ambient-like in overall sound with those vocals and haunting synthesizers. This is a beautifully constructed gem of a track.

The second of the epic length tracks, is the penultimate track, “Frozen Moment” (13:24), when a proper “rip roaring” guitar intro from Adrian which becomes nicely melodic around the 1 minute mark allows the vocals to enter. The superb guitar work continues behind the voice and paints another very atmospheric track with snatches of keyboards picked up from time to time. There is a sense of a heavier sound to this track. The feeling of loss continues within this track and again the instrumentation seems “stripped down” at points, to accentuate this feeling. There are constant shifts of pace, instrumentation and vocalization to construct the emotional rollercoaster that the track provides us with. Around the 8 minute mark, there is a building up of sound which signifies another change and Adrian’s glorious guitar melody appears astride the tight-knit engine room of the band. The track motors towards the finale, continuing to build with the sound of the keyboards to the forefront. The band are performing excellently as the song enters the last minute at full speed and with 30 seconds to go, the sound drops and it is gone!

The final short track, “Sunrise” (1:28), has a sublime piano melody with a plaintive cello behind and is the perfect ending to a truly superb album.

“One Eye On The Sunrise” is a superb album which has taken some large steps from Traces in 2010, and should attract more fans to the band. News released very recently provided both the good and the not-so-good scenarios. The good news is that there is talk of another album in 2013 and possibly a tour as well. This is slightly tempered by the not-so-good news that due to the success of the solo career of vocalist, Marc Atkinson, he could not commit to the proposed schedule for Nine Stone Close in 2013.

Nine Stones Close have produced a superb album due to the band having the correct amalgamation of excellent musicians, who are inspired when playing together and the music simply immerses the senses of the listener. Another “must have” for the collection.

Key Tracks:  A Secret, Janus, One Eye On The Sunrise

Promote your mixtape at ReverbNation.com