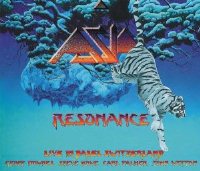 Since 1982, rock super group Asia has been steadily pumping out studio albums and live albums. A quickGoogle search reveals two bands under the name “Asia”, one fronted by John Wetton and one fronted by John Payne. After a legal dispute in 2006, an agreement was reached that John Payne could tour and record with Asia under the name “Asia Featuring John Payne.” In the meantime, the original members of Asia have reunited and have since put out 3 studio albums. Resonance was recorded live in Switzerland during the original Asia’s 2010/2011 Omega tour.

Although Asia has been through various personnel changes, it’s great to see the original four members get back together and give fans what they want. The set list features both old and new, from a surprisingly strong “Heat of the Moment” to Omega’s “Holy War,” which doesn’t stray far for the classic Asia formula. As with any set list, this one isn’t short on surprises. Steve Howe fans will be thrilled to hear some fantastic cut’s from his solo albums including a very tranquil version of “All’s A Chord” and “The Valley of Rocks.”  There’s something special about Mr. Howe and his acoustic guitar – his playing creates an atmosphere that only a legend such as he can create, silencing the whole crowd as they watch in awe.

With Asia having such a long track record, I was admittedly a bit nervous to hear how Wetton’s voice has held up over the years. Listening to “Don’t Cry” and “The Smile Has Left Your Eyes,” it is very clear that Wetton has done what it takes to keep his voice immune to the effects of time. That’s not to say the background vocals by Steve Howe and Carl Palmer (drums) aren’t just as good as before. As always, their voices complement each other’s wonderfully, making for a very pleasant vocal mix.

Resonance isn’t a live album that will break any boundaries, but it is refreshing to hear a reunion where the band members sound just as good as they did in their golden days. I think any listener that hasn’t been in tune with Asia’s latest releases will be impressed with the state of the band. After taking Resonance for a spin, it might be worth checking out what Asia’s new studio material has to offer.

Key Tracks: I Believe, An Extraordinary Life, Heat of the Moment