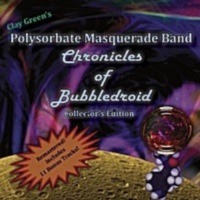 Recently a very unusual CD landed on my desk for review. This is a band that I can say with certainty that I have never heard of before, and the name of the band, Clay Green’s Polysorbate Masquerade Band. The CD comes in two versions, Chronicles of Bubbledroid and the Collector’s Edition of the same CD which has additional tracks. The band consist of 2 real people, Clay Green (guitars) and Edward Richard (bass/organ and other keyboards) and the third “member” of the band is The Bubbledroid, which is the name given to their drum machine. It’s all very surreal and it continues if you check out their website, where some of the information, for no obvious reason, appears in Italian. The band compare the music they produce as a merging of Arthur Brown’s Kingdom Come (he of the Crazy World of Arthur Brown who had a huge hit with “Fire”) with a little Van Der Graaf Generator and some PFM (Premiata Fornieri Marconi, an Italian prog band) but without the vocals.

I wasn’t sure what to expect and was in equal parts, surprised, interested and somewhat astounded by the music escaping from the speakers. As a preamble to the review, the music is instrumental prog rock, recalling the early 70’s atmosphere with swirling Hammonds, a dash of wah-wah guitar, complex arrangements and of course, the obligatory changing time signatures.

The Chronicles of Bubbledroid Collector’s Edition, comprises 23 tracks, varying in playing time from the ultra-short track 3, “Time Sun Intro” at only 43 seconds to the long track 16, “Thanks” which clocks in at 8:44 minutes. There are 6 tracks which last for less than 2 minutes and a further 5 which last less than 3 minutes and my impression is that while some of these tracks do appear as complete, many seem to be “works in progress” or ideas that have never fully evolved.

All of the very short tracks, “Time Sun Intro,” “Shuffle Butts Slowdown,” “Groovy Paste,” “Rough Landing”, “Plan 2,”  and “Lost At Sea Part 1” are, as all tracks are, heavily keyboard orientated and all are very good. None of these tracks could be guilty for outstaying their welcome and while one or two do seem too short they do appear as linking bits of music as opposed to the main body of the album. It can be difficult to separate these short tracks as they tend to merge into the longer tracks.

The opening track to any album, I feel, is the most important as it always puts the listener into a distinct area, and by that I mean that it is the equivalent of meeting a person for the first time, when the first impression is the one that will be the lasting impression. Track 1 on The Chronicles of Bubbledroid is “Saturns Orbit” (5:59) and is immediately a “scene setter” allowing Clay Green (guitars) and Edward Richard (everything else except drums) to show what they can do. There is ample excellent guitar work with both lead and bass, and the keyboards are simply stunning. This is an opening track that makes you feel you have just opened a little treasure chest of audio gems.

Some tracks grabbed my interest slightly more than others, such as “Frog Boy” (2:13), mainly due to The Nice-like keyboards and I have already featured “Time Sun” (5:13) on my radio show with its very retro sound, catchy melody and “left field” time patterns. “Sixty Eight” (2:16) has a very interesting Pink Floydesque bass line which runs through the track allowing the keyboards and guitars to build on that foundation. Track 15, “Return of Episode Xanadu” (3:08) is another of the memorable tracks on first listen, with an almost classical organ intro, quickly into a church organ, which then gives way to the magnificent guitar melody by Clay, counterpointed by the subtle organ runs.

The penultimate track, “Lost At Sea Part 2” (6:08) has superb acoustic guitar by Clay which enters after sweeping keyboards by Edward, including harpsichord passages, which then return towards the second half of the track before a time change provides the basis of a more powerful driving track. Clay switches to both electric and acoustic multi-tracked guitars and the sound is exquisite.

Once the album is finished, you realize that you have just had a great deal of fun. Track after track draws you in with its complex time signatures and the retro sound, but because the album veers in many different directions, there is never any chance of your interest waning. Some tracks, such as those already mentioned, are immediate but more “gems” seem to appear with repeated listens. Themes are repeated using different instrumentation and each track becomes a variation on itself, which is superbly clever musicianship.

To sum it all up, this album is not really a “cannot live without it” purchase but I certainly feel that you will definitely miss out on an experience if you do not at least hear this music. This is a very enjoyable album and this reviewer is already looking forward to the next release by Clay Green’s Polysorbate Masquerade Band as there is great potential on show with The Chronicles of Bubbledroid (Collector’s edition).