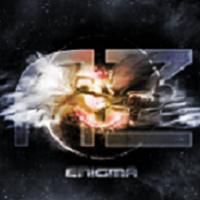 The word “enigma” can be defined as a person, thing, or situation that is puzzling or mysterious, or something with a hidden meaning such as a riddle.   As I look at the cover, with what looks like the forces of light and dark locked in battle in front of a cosmic background, “enigma” seems to be the appropriate word to sum it up. With two years of production clocked in, Enigma is Aeon Zen’s third album that is sure to impress listeners with a masterful blend of genres and creativity.  This is the type of album that becomes more and more enjoyable with each listen.

Consisting of Rich Hinks (vocals, guitar, bass), Andi Kravljaca (vocals), Matt Shepherd (guitar), Shaz (keyboards), and Steve Burton (drums), Aeon Zen is a rising star in their native UK’s progressive scene since their formation in 2008 and first release in 2009.  Over four years into their formation, Enigma is progressive metal in its top form.  Hinks stated that the band has "tried to push ourselves with every aspect of this album…“From the concept, to the flow of each song into the next, to the interplay with vocalists, and everything in between.”  It looks like all that effort has paid off and made a marvelous album.

The musical journey begins with “Enter the Enigma.” It starts off slow before unleashing its power and washing over you like a destructive wave. It is captivating with its mysterious and majestic quality and this is just the beginning of what is to come.  The crushing “Artificial Soul” is followed by “Divinity,” which comes out blazing and does not let up.  Also, it has a great mix of clean and growling vocals and is probably the heaviest song on the album.  The serene and mellow “Seven Hills” shows off the contrast of two sides of their music.  They can do loud, fast, and heavy or somber, slow, and light while still making quality music.  Nothing suffers from the change of pace.

“Warning” is brilliant from start to finish.  “Turned to Ash” is a haunting song that gets better and better as it goes along. “Still Human” dazzles with its keyboard opening.  A keyboard has never sounded this good to me and it holds its own against the guitars and the drums. The solemn “Eternal Snow” keeps the keyboards on prominent display in the beginning before the guitar takes center stage in the second half.  “Downfall” ends Enigma with jaw dropping skill that showcases the talent that has made this album of the top notch variety.

Aeon Zen’s Enigma is a phenomenal album.  It burns with the brilliance of a lone star in the darkest of skies.  They hoped to create an album that was their “strongest and most ambitious album of music to date… (and their) best album yet.”  From where I am sitting, they did just that.  The progressive metal bar is set for 2013.  Good luck to anyone trying to compete with these guys, because they are going to need it.