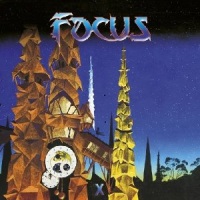 Focus are a Dutch progressive rock band founded away back in the depths of time, well 1969 to be precise, by Thijs Van Leer, a classically trained organist and flautist and Jan Akkerman, guitar virtuoso. (Well at least I think he is). They first released an album, In And Out Of Focus in 1970 and then they had a few hit singles, notably “Hocus Pocus” and “Sylvia.” Not too long after this however, the band seemed to go the way of so many, with internal wrangling causing the group to fold.  A very carefully planned resurrection saw the album, Focus 8 gain some critical acclaim and the band have progressed from that point. The album currently under review, Focus X, sees two of the original band members still together, Thijs Van Leer and the drummer, Pierre Van Der Linden. They are joined by Bobby Jacobs on bass and Menno Gootjes on guitar. Focus X is the new studio album, six years after the previous one. The big question now is “Can Focus be as good as they once were? (Or to put it another way, “Can Focus become refocused?”)

Focus X has ten tracks and a running time of around 51 minutes. “Talk Of The Clown,” track 8 is the shortest at 3:04 minutes and track 2, “Focus 10” has the clock running on close to the 6 minute mark at (5:59).
Having listened to this album several times since it arrived on my desk, there are many highlights showing that the band are back, and sometimes even reaching the pinnacle they achieved in the early 70’s. As with most Focus album releases, perfection is not attained here, but the sheer power joy and energy that once bounced out of the speakers, now seems to be back.

At the moment, the tracks I am enjoying are track 1, “Father Bachus” (4:11), track 3, “Victoria” (5:38) and the final track, “X Roads” (5:49). “Father Bachus” is vintage Focus brought up to date and sounds like a real concert opener (especially with the spoken lyric), containing the instantly recognizable flute motifs (Thijs van Leer), the driving bass/drums,  the superb lead guitar (Menno Gootjes) and not forgetting the sweeping keyboards (Thijs). Those hauntingly stunning flute motifs float in and out of the track producing an excellent starter to the album.
“Victoria” is a slow burner of a track which allows Menno to pick out a terrific melody and the track ebbs and flows with Thijs’ keyboards sweeping around, while the drums/bass of Pierre and Bobby remain steady as the foundation of the track.

The closing track, “X Roads”, has a very jazzy feel and the guitar playing by Menno is on par with the performances in the original band by Jan Akkerman. The track simply bustles along with the flute motifs here and there within the mix. The vocals again are of the spoken variety, similar to those in the opening track, but fit in well.

This is a very interesting 10 track album which draws the listener in and at 51 minutes leaves the listener eager for more.  Certainly an album that deserves to be heard by many people, and is not just a nostalgia trip for confirmed Focus fans, as this is a band that that has evolved and moved on. Listening to this album does recall the Focus of the 70’s, but the potential is shown for this version of the band to equal, if not exceeds that which the original band achieved four decades ago.