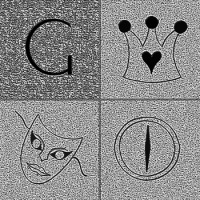 Another CD (Garden EP), arrived on my desk, from a band that wasn’t on my audio horizon in any direction. Imagine my surprise to find that they are a Scottish band, based between Edinburgh and Glasgow. Not sure if this means that we might not recognize the specific area or that they commute between the two cities. Formed originally back in 2006 as a vehicle for the composer and multi-instrumentalist, Samuel Bradley, who had the initial idea of “dovetailing” together the areas of power metal, progressive rock and, instead of synthesized orchestral sounds, use a violin. The actual process of putting together a band was very time consuming and was only completed during 2011, prior to recording a demo disc, during which time, the band had taken on influences from many different sources. The production of the Garden EP (Dec 2012) showed the evolution that had taken place from the point of inception (2006) and the music was fairly far removed from Samuel Bradley’s original concept.

The Garden EP is a 3 track mini-album, running to around 27 minutes, with the opening track, “Composite Queen,” the shortest at 8:39 minutes and the second track, “North,” the longest at 9:55 minutes.

The opening track, “Composite Queen” (8:39), starts with a wall of sound punctuated by “power piano”  and violin riffs, which can be slightly discordant until just after the 1 minute mark. Piano and violin trade places until the “theatrical” vocals appear. When the backing voices join in however, they seem to be trying to out-compete each other. Around the 4 minute mark, the sound drops and the track takes on a more “folky” feel, before hitting a superb flute/guitar passage, reminiscent of, but not copying, Jethro Tull. The track then ebbs and flows before the vocals return around 6 minutes. There is another flute passage at 6:30 minutes before the power sound of the violin and piano return to steer the track, now distinctly residing in the metal arena, towards the finale. Vocals continue to vie for space as the track finishes very abruptly.

“North” (9:55) is track 2 and starts very gently with an excellent piano passage before the violin and acoustic guitar join in and continue the gentle approach. Clear vocals by Samuel Bradley appear around 1 minute sounding very plaintive and in harmony with the similarly plaintive violin melody which works surprisingly well. The track builds slowly with the sound becoming stronger behind the voices. A long vocal passage leads into a guitar passage behind the voices at around the 4:30 minute mark. The guitar becomes much more strident before disappearing to leave the piano to carry the melody and then reappears again to lend a more metal sound to the proceedings. There appears a very mellow bass line passage behind the guitar before the surprise of a saxophone passage further increasing the “mellowness.” Back in comes the main vocal, then the backing vocals, around 8 minutes, but again they seem to be at odds with each other. An acoustic guitar passage around the 9:15 minute mark sets the tempo, with muted vocals over the top, as the track fades out.

The final track on the Garden EP is “Freya’s Song” (8:51) which starts out in a metal manner with guitar and violin over the top tracing out the melody. The vocals by Samuel Bradley appear at about a minute and the piano/violin combination forms the backdrop to the vocals. The track sweeps here and there, kept in check by the vocals. Again, unfortunately, there is an indication of some discordancy within the vocal/backing vocals. The middle section seems a tad too long and the interest of this listener started to falter. A change in the tempo around the 5:30 mark drew me back into the mix with an excellent passage of music, with the violin and cello being very dramatic. The lead vocals add to the dramatic timbre of the track which fades out with the sound of the cello.

Initially, listening to these three tracks on the Garden EP certainly didn’t have me in my comfort zone. As I persevered with the tracks, I began to appreciate the superb passages present in all three tracks, which highlights the tremendous potential this band possesses. The down side I found was that the complexity and sheer intensity within the tracks became too great and I feel that this is partially due to the length of the tracks. There did also seem to be points where the production of the instrument mix didn’t quite gel and the same point could be leveled at the vocal mix.

Do not get me wrong, I think this is an extremely brave step for a new band and a debut recording, and while I do not feel that everything has worked perfectly over the three tracks, with a few tweaks in certain areas, I feel that there will be an excellent EP/CD just around the corner.

As a debut recording, highlighting a different mix of genres, this is not an easy CD to “get into,” but with the nods in the general direction of the Incredible String Band and Jethro Tull, then future material from the band should be very interesting. The second EP, being rehearsed at the moment, should be out in the summer.

Garden, I think, are one to keep an eye on.