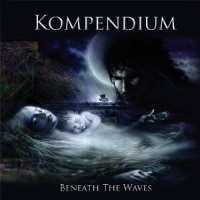 Kompendium is the name of the “band” behind the concept album Beneath The Waves. This is the brainchild of Rob Reed, from the Welsh progressive rock band, Magenta, and it has taken 3 years to come to fruition. There are remarkable musicians involved in this project, such as Steve Balsamo (vocals), Steve Hackett (guitar), Gavin Harrison (drums), Nick Beggs (chapman stick), Troy Donockley (Uileann pipes and whistles), Nick Barrett (guitar) and more, including a contribution by the opera singers, Rhys Merion and Shan Cothi, with superb input by the English Chamber Choir and the London Session Orchestra.

The basis of the story is a darkly romantic sea tale, apparently based around an early 20th Century news story. Connor McGregor is a man who finds himself almost at the limit of grief, as his wife (Lilly) took her own life after the death of their only child, leaving him in a whirl of almost unbearable guilt. His fishing boat is then caught in a severe storm, sinks, and he is the only survivor, but begins to believe that his late wife was reaching out for him. Connor retreats deep within himself and spends his time on long beach walks until, ultimately, he fails to return.

While a sad, dark, and possibly depressing story, it is expressed in a way that the listener becomes drawn in and ultimately “lives” the turmoil and questions that Connor is undergoing, and the whole setting remains both emotional and uplifting. This is truly a return to the long gone days of listening to a concept album from the start (a brief narration intro to track 1) to the end (another brief narration) and drifting on through the intervening waves of majestic sound.

Beneath The Waves has a total running time of 67 minutes spread across 12 tracks, with the shortest being track 9 “Il Tempo E Giunto” at 3:08 minutes and the longest, track 5, “The Storm” running on to just over 11 minutes. (11:03)

As Beneath The Waves is a concept album and the themes are important to the overall story, it can be difficult to pick out highlight tracks, but then again, no-one said that life was always easy. So If I was really pushed, I would go for “Exordium,” track 1 (8:55), “The Storm,” track 5 (11:03) and “Reunion,” the final track (5:45.)

The opening track, “Exordium” is a very powerfully emotive chunk of music which incorporates many interweaving themes and musical genres. It is a majestic introduction with a simple short narrative leading on into the music, setting the scene for the listeners emotional roller-coaster ride across the following eleven tracks. Track 5, “The Storm” is the album’s epic track, merging opera, classical, choral, classic heavy rock and celtic to paint the raging storm (which Connor eventually sees as a “reaching out” from Lilly.) The closing track, “Reunion,” is exactly that, bringing Lilly, Connor and the child back together as one. This superbly brings the concept story to a conclusion and is again a powerful slice of recurring themes, performed by musicians who are totally “in tune” with the storyline.

Beneath The Waves is a truly superb piece of work, and Rob Reed, and the myriad of vocalists and musicians, involved in its 3 year gestation period should feel a sense of supreme achievement. It is exactly what Rob set out to do, and that was to produce an album that would re-introduce the listener to settling down for over an hour and focusing simply upon the conceptual storyline within the music.

The CD, Beneath The Waves, is an awesome achievement and apart from having a “One To Buy” sticker on the front, it should also host a “No Home Should Be Without One” sticker as well. Will there be another album from Kompendium in the future? Only Rob Reed will know the answer to that question, but if the answer is “no,” this album is a wonderful milestone marker along the route of the concept album.