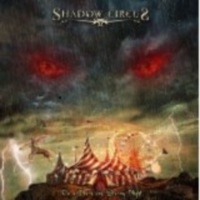 Shadow Circus were formed back in 2006 by John Fontana and David Bobick and this album On A Dark And Stormy Night is their third release following on from Welcome To The Freakroom (2007) and Whispers and Screams (2009). There are now 5 members to the band, John Fontana (guitar/orchestral and incidental keyboards), David Bobick (lead vocals), Jason Brower (drums/percussion), Mark Masek (bass/cello/12 string and nylon string guitar) and David Silver (keyboards). Each of the previous releases has featured tracks inspired by a particular book (and indeed the band name comes from a Ray Bradbury novel). One track on the 2007 album was based around The Talisman and a 7 part suite (lasting 34 minutes) from the 2009 album, which was based on the Stephen King book, The Stand. The band  has  taken another step in this direction with On a Dark And Stormy Night being a concept album based on the Madeleine L’Engle fantasy novel “A Wrinkle In Time”.

This album comprises 9 tracks with the penultimate track, “Ixchel,” being the shortest at 4:39 minutes and track 4, “Make Way For The Big Show,” the longest at 8:42 minutes. The total running time of the concept album is around 58 minutes.

The opening track, “Overture” (8:09) is supremely atmospheric with its thunderstorm effects and cello (Mark Masek) and then the “orchestral” keyboards of David Silver appear to add even more atmosphere. Around the 2 minute mark, drums/bass and John Fontana’s exquisite guitar enters. An amazing keyboard led passage drives the track on with the bands rhythm engine providing a superb foundation. Sweeping time changes and a return to the original keyboard theme certainly grabs the listener. More interplay between guitar and keyboards carry the track along. Around the 6 minute mark, there is a drop in the sound, acoustic guitars appear and a simply superb keyboard passage is followed by a magnificently sculpted guitar melody. As the track nears its finale, the sound builds and then drifts away. As opening tracks go, this is “up there” with the best of them and certainly makes you look forward to hearing the rest of the album.

Not being conversant with the book the album concept is based on, I am listening and reviewing the music as it stands on its own and realize that I may miss subtle nuances within the music which would coincide with happenings in the book.

Other standout tracks for me, are, “Daddy’s Gone” (5:58) with superb Rick Wakemanesque retro piano and keyboards and also a little lighter, more desolate sounding piece than the opener, and “Whosit Whatsit and Which” (6:39), with its Hammond organ/guitar atmospheric introduction prior to a time switch before the vocals appear. These bring to mind the style, both lyrically and vocally, of the early (70-73) Genesis and there is also a big nod in the direction of Pink Floyd with the female backing voices. “Uriel” (5:47) is another outstanding track, highlighting those superb keyboards, varying from the gentle piano introduction to the sweeping waves of synthesizers throughout the song allowing the rest of the band to show their skills as the guitar weaves in and out over the rock steady bass/drums rhythm.

I must also briefly mention track 8, “Ixchel” (4:35) which has a superb nylon string guitar introduction into more sweeping synthesizers and a melancholic piano which forms another majestic soundscape. Beautiful female vocals sweep over the top of the orchestral keyboards and the amazing cello playing of Mark compete the track.
This is definitely an album that will make any symphonic prog listener feel very comfortable. Terrific atmospheric passages, superb keyboard passages (that Hammond sound is so majestic) and blistering guitar work coupled with excellently fitting vocals ooze out of the speakers.

As I said earlier, the book that the concept of the album is based isn’t one that I have read but I found the entire album to be superb, and listeners who do know the story of “A Wrinkle In Time” may get even more out of the album.

A very highly recommended album for any prog collection and I compliment the 5 members of the band on their excellent achievement.


Learn how to get your music noticed at ReverbNation.com
By Keith "MuzikMan" Hannaleck at January 05, 2013