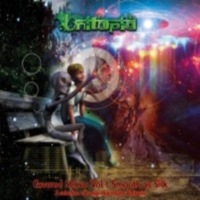 The album for review is Covered Mirror Vol. 1 (Smooth as Silk) and comprises 13 tracks with a combined running time of around 75 minutes. The shortest track is the final track, “The Way The Waters Are Moving” (3:17) and the one clocking the longest running time is track 11, “The Yes Medley” (12:10). This doesn’t include the 2 short “Prelude” and “Interlude” sections of 2 minutes or less. This is the bands 5th album following 3 studio albums, More Than A Dream (2005), The Garden (2008) and Artificial (2010), and a live album in 2011, One Night in Europe.

The interesting aspect of this current release is that it is an album of cover versions of songs that inspired the two founding members of the band, Mark and Sean. An indication of the diversity of musical areas that inspired Mark and Sean can be seen by the songs covered on this album. Songs by Klaatu, Marillion, Icehouse, Genesis, Led Zeppelin, Supertramp, Todd Rundgren, The Korgis, Yes, Alan Parsons and The Flower Kings.

Not only are all of the members of Unitopia excellent musicians, they have in Mark Trueack a superb vocalist who possesses a voice which can, at times, be soft and gentle, but amazingly powerful when required. The ease with which he can move from one extreme to the other is nothing short of awesome.

Covered Mirror is an album which the listener will immediately feel comfortable with as many of the tracks are so well known. I was “wallowing in my comfort zone” for all 10:09 minutes of track 5, “Genesis Medley.” To hear this different version of Genesis material literally made the hairs on the back of my neck stand on end as it was simply stunning. (The only other time this has happened was when I saw Paul McCartney live many years ago when he first put Beatles songs into his live work, and it was “Hey Jude” that made the neck hairs stand to attention). The group effortlessly move through truncated versions of “The Silent Sun,” “Suppers Ready,” “Dancing With Moonlit Knight,” “The Lamb Lies Down On Broadway” and “Carpet Crawlers.” This track is then followed by a cover of “Rain Song” (7:01) by Led Zeppelin, which has an amazing flute/percussion introduction before the song becomes instantly recognizable after about a minute. Taken at a fairly slow pace, the emotion drenched voice of Mark superbly complements the other musicians.

The second track, the first full track, is Unitopia’s version of “Calling Occupants Of Interplanetary Craft” (6:32), which is instantly recognizable due to the huge hit it provided the Carpenters, although written and recorded the year before by Klaatu. The sound produced throughout this track is stunning and plaudits should certainly be given to The Amicus Strings (2 violins/viola/cello) who create sublime soundscapes behind the rest of the musicians.

This is an album of superbly interesting cover songs brought together by Mark and Sean, which serve to highlight the stunning skills contained within the band, Unitopia. From the voice of Mark, the virtuoso keyboards of Sean, Matt’s sublime guitar work, beautiful complimentary percussion  from Tim, soaring flute et al from Dan and the stunningly powerful rhythm engine that is provided by David and Craig, this album is a joy to listen to from start to finish.

A definite “one to purchase” sticker on this one, and, I feel certain that anyone doing so and hearing Unitopia for the first time will soon plunder their back catalogue. An interesting point to end on, is that the physical CD of Covered Mirror, contains information about forthcoming Unitopia releases through to 2014, and although it doesn’t mention anything about it, it should be noted that the album under review is called Covered Mirror Vol. 1 which does suggest at least another one release of this type of album in the pipeline.