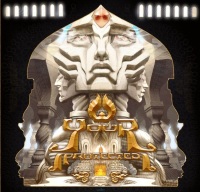 One of the CDs for review this week is the self-titled debut release from Your Protected, a 4 piece band hailing from Newport in the UK. The four band members are James Tottle (guitar), Chris Tookey (guitar), James White (bass) and Michael Edwards (drums).

Your Protected is their self-titled debut CD and draws a description in various places as a progressive metal instrumental band. The CD has 6 tracks with a total running time of around 20 minutes. The longest track is track 3, “Bright Black” at 4:20 minutes and the shortest is “Dark White” lasting a mere 2:12 minutes.

I always feel that instrumental albums (or mini albums/ep) need to have something extra to ensure that they hold the listeners attention. With that in mind, and having played the CD several times, does this band have that little extra?

With all these tracks under the 4:30 minute mark in length, it is unlikely that the possibility of being too long will come into play. My most listened tracks at the moment are the opening two tracks on the CD, “Cordyceps”  (3:02) and “Do The Trapeze” (3:44).

“Cordyceps” opens with a measured bass and a pleasant guitar riff repeating before the drums appear, and the guitar riff evolves into an instantly recognizable metal style riff. The drums and bass certainly lay a firm foundation for the two guitarists to build their riffs upon the guitarists, James and Chris…interplaying riffs creating a mini “wall of sound” which is maintained to the finale.  It likely all ends probably just before the point of no return because it they had continued in the same vein they may have run the risk of losing the listener.

“Do The Trapeze” has a very catchy intro with that first riff still going round and round in my head searching for the name of what it is reminiscent of (by the time the review is online, I’m sure that I will have remembered). The top guitar riff is catchy above the solid drums and bass backdrop. Little flashes of very bluesy sounding riffs are replaced around the 2 minute mark with an almost solo bass ultimately being joined by a lead guitar producing a very atmospheric passage. The drums become more prevalent, underpinning the track as it moves to its closure. The slight time and instrument changes maintain the interest of the listener to the end.

My one area of concern about instrumental albums has been reiterated here. Good though some of the tracks are, I was almost looking for a vocalist to really lift them. Technically, Your Protected is a good debut album, but not one, in my view, to set the heather alight. I don’t feel that there is that “je ne sais quoi” factor contained in the 6 tracks here on show.

Not an essential purchase, I don’t think, but worth a listen, especially as my opinion may not mirror that of everyone.
3.5 Stars

Key Tracks: Cordyceps, Do The Trapeze