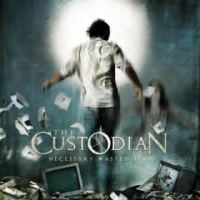 I have often stated that one of the perks of being a reviewer is to come across a band that I have not heard of previously and to thoroughly enjoy their album. Todays’ reviewed band certainly come into this category, especially since they all seem to be a bit shy. The band are The Custodian and their debut album is entitled Necessary Wasted Time, but their biography gives little information about the band. They are a 4 piece band made up of, F (vocals, drums/guitar/synths), A (guitars), P (ac guitar) and J (bass) and that basically concludes the information that is “out there” in the public domain. There is a picture on their Facebook page but again, no more information. My own view, is that they may be musicians who are contracted to different labels (remember the Travelling Wilburys) or then again, they may just like their privacy. Whichever, if either, a stab in the dark is anywhere near the mark, what is not is any doubt is the debut album and it is now time to focus the attention on the music contained therein.

This album has graced my pc many times in the last week, and as with many others, my favorite tracks have changed from time to time, but at the time of writing, they are “The Man Out Of Time,” “Stop Talking” and “Necessary Wasted Time,” which has also been featured on my radio show.

The opening track to the album, Necessary Wasted Time, is “The Man Out Of Time” (3:28) and has a superb acoustic guitar passage to start, then is joined by what could be a sitar riff and keyboards all packed into the stunning opening 30 seconds. The track continues in the same vein with the keyboards becoming more prominent until a change of tempo around 1:25 minutes, producing a chunkier sound before merging back into the opening theme, with background vocalizations above the music. At around 3:00 minutes, we are back into the chunkier sounding area again, which takes the track out. There is a little spoken message at the end the track. This is a “belter” of an opening track, which is all but an instrumental, and paves the way for a magnificent array of melodic progressive music.

Track 2, “Stop Talking” (5:14) again has an acoustic start with an excellent little melody and keyboards building in the background. The vocals, when they initially appear, sound as if they are going through a vocoder which then dissolves into an acoustic passage with “proper” vocals, which are both powerful and clear. Synths provide a string sound in the background and the guitarist (F or P or both?) shows how well he can handle his instrument. A beautiful flowing passage carries the track along with slight tempo changes and a return to the “vocoder” vocals in the background around the 3:30 minute mark. The sounds being produced by the musicians on this track are fantastic and a short electric guitar motif appears late in the track before the acoustic ending.

The final track on the album is the title track, “Necessary Wasted Time” (8:48) and it starts with a simple acoustic intro to the vocals and the keyboards and also has a slower tempo than the two tracks previously mentioned. The catchy sound is very quick to settle into your brain and you find yourself being immersed in the music rapidly. Small “hook” riffs appear from time to time and the synths become much more predominant from about 2:15 minutes which maintains the overall superb feel to the track. At about the 3:30 minute mark a change in tempo provides a bountiful and wonderful acoustic passage which sits so well in the mix. An electric guitar riff appears at around 4:45 minutes which is extremely melodic and floats above the powerful drum/bass foundations. There is a short radio style narration before the song fades to return with a stunning (and short) piano melody, before the acoustic guitar and keyboards pick up the initial melody again and the sound builds up with washes of keys and another electric guitar work-out as the song passes the 8:00 minute mark and makes its way to the finale.

As a debut album, this is superb. The sound that they produce at times recalls bands like Black Sabbath, Uriah Heep and Led Zeppelin, not in the heaviness stakes, but I always found that these bands could produce amazingly stunning acoustic guitar based songs. The Custodian has that same characteristic sound within this album. As with the Flicker album recently reviewed, there is also the feeling that there is never any rush to proceedings and the songs travel at the pace they should. There is a terrific balance between the acoustic and electric areas of the band and the result is this stunning debut album.

Necessary Wasted Time is another one of those albums that should carry a “One To Buy” sticker and should definitely be a purchase for all discerning fans of melodic progressive rock.