Review: Flicker-How Much Are You Willing To Forget 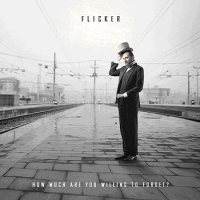 Welcome to another of the initially “unknown” bands to be reviewed by The Ancient One. The band, Flicker, are from the UK and are about to release their debut album on CD and vinyl, although the album, How Much Are You Willing To Forget, has been available via the normal download sites since August last year. The band are a 4 piece, hailing from Aylesbury, comprising Ellis Mordecai (vocals/guitar), Andrew Day (guitar), Peter Coussens (bass) and Vaughan Abray (drums).

How Much Are You Willing To Forget is made up of 9 tracks, with a total running time around 50 minutes. “Intro” is the shortest track; taking up only 1:46 minutes, while at the other end of the scale, track 8, “Breathless” is the longest, running to 8:20 minutes.

This release is indeed a welcome addition to the continuously growing number of excellent prog albums that seem to have been released since I started writing reviews. The band have produced an extremely interesting debut album, which at different points, “doffs its hat” to bands such as Pink Floyd and early Genesis, while not merely copying them. I would also liken them to Edison’s Children, not so much in the sound, but more in the structure and feel of the music.

I have listened to How Much Are You Willing To Forget, many times over the last week or so, and it is filled with amazing melodies, superb musical skills and can swing from very sparse melodic passages, to almost “wall of sound” passages. Credit must be given to the band (and the producers of the album) for an album where the musicians do not ever give the impression that the music was forced or rushed. Each of the tracks presented is allowed to evolve at its own pace.

Favorite tracks are difficult to choose as all the tracks are excellently structured and all possess a freshness that makes you eager to hear the next one up. By the time the review gets online, I will probably have changed the tracks listed as favorites. At the moment, the tracks I would class as highlights on the album are track 3, “Out There” (6:00), track 5, “Counting Time” (7:32) and track 8, “Breathless” (8:20).

“Out There” begins with a sublime little piano intro, leading into the vocal by Ellis Mordecai, which fits in very well, and the track slowly builds with a change of pace around 1:15 minutes which sees the rest of the instruments appearing. Even on the first hearing, there are little hooks that get into your head. The track changes pace several times and the guitar riffs build up throughout, but always maintain the melodic nature of the track. At the 4:30 minute mark, there is a superb passage that takes the track out.

“Counting Time” has an excellent intro with a beautiful guitar melody prior to the appearance of the (double-tracked?) vocals. The lyrical content is terrific and with the clarity of the vocal, is easy to follow. The track seems to ebb and flow without a hint of rushing and the way the track evolves seems so natural. By the halfway point, the melody has again managed to get a foothold in your head. The track continues with excellent acoustic guitars and some orchestral washes in the background. Just before the 6:00 minute mark, the guitar starts to pick out another melody and the voices appear above the melody as the track moves to the end.

A simply stunning Spanish style guitar passage starts “Breathless” and continues on until around 1:15 minutes when an electric guitar picks up the melody. When the voice of Ellis appears, it is so clear and unforced, which is why I used the comparison with Edison’s Children in the feel of the music. Around the 3 minute mark, there is a harder, harsher sound, which drops, and then reappears before at 5:30 minutes, there is an extended acoustic passage, with excellent bass/drums underpinning the track. Another switch around 7:00 minutes, allows the re-entry of the harsher superb guitar and the track simply motors to the end. (This track has already featured in my radio show)

This is a wonderful album, from start to finish. The whole feel of the album is excellent. Each track is like unearthing another little nugget of gold. The 4 members of the band should be applauded for producing a debut album that simply oozes class. This is a definite “One To Buy” and “Take Home And Enjoy Today” stickered album.

Flicker may be a new, and little known, band at the moment, but I do not feel that will be the case for very long. Buy How Much Are You Willing To Forget, settle in your favorite chair, press play and let your mind absorb the amazing music that is Flicker.
5/5 Stars