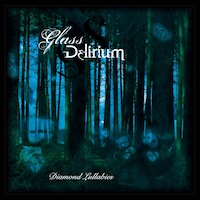 Glass Delirium are a progressive alternative rock band that list their influences as being jazz, classical, pop, metal and soundtracks. That’s quite the combination! They are lead by vocalist Michelle who is backed up by Scott (Guitar), Aeon (Bass), David( Keys) and Pat (Drums).

Diamond Lullabies opens with one of the quieter tracks on the album. “Tranquility” features some nice piano playing from David and a gentle vocal from Michelle. The track builds as it goes along and ends up being the perfect introduction to track two, “Reality.” The transition between the two tracks is so seamless that you would think it’s all one song. The opening riff of “Reality” is fantastic and it sets the tone for the rest of the song which powers along at a really rocking pace. “Reality” slows things back down at the end, which brings things full circle.

“Snowy London” and “Beautiful Plaything” reveal the different sides to Michelle’s voice. On “Snowy London” she completely dominates the chorus with a powerful vocal. Then on “Beautiful Plaything” she sings a lot softer with seemingly much greater emphasis on her phrasing. Her lower, almost whispered, vocals on the first verse show a side to her that doesn’t really appear elsewhere on the album.

“Over The Ice” features great guitar work from Scott. The frantic riff that plays throughout the verse sets the pace and carries the song. “Funeral of Eighty Days” really shows off Pat’s ability on the drums. The drum fills in this song have so much power and force; they push themselves to the front of the song and demand your attention.
From there the album slows down with the acoustic track, “Untitled Lullaby.” The mellow song shows a different side to the band and is a highlight of the album. It is followed up by a song that combines the bands quieter side with the harder rocking stuff from earlier on the record.  The softer, more laidback verses in “Convalescence Dawn” provide a great contrast to the heavy, distortion filled chorus.

“Consequential Halo” gives the album one last shot of all-out rock before it closes with “Simple Life.” “Simple Life” is a fantastic song that sees the group stray into power ballad territory. It gives the whole band chance to shine and is a more than fitting way to end the record.

Diamond Lullabies is a great album. Glass Delirium have somehow managed to combine all of their different influences together to create a sound that they call their own. It’s clear from this record that everyone in Glass Delirium is extremely good at what they do but it has to be said that the clear star of the show is Michelle. Her voice is distinct, versatile but most importantly, a pleasure to listen to. Hopefully there is a lot more to come from Michelle and the band in the future.