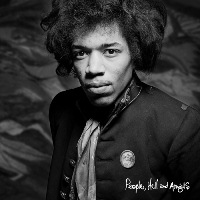 People, Hell and Angels is the first Jimi Hendrix release of the year and fans will be delighted to know that there are 12 previously unreleased tracks on this recording. Eddie Kramer was once again called upon to tap into all the nuances of Jimi’s artistry and he does a superb job of engineering the tracks.

Hendrix coined the term People, Hell and Angels and at the time of these recordings he was incorporating a different style of music into his repertoire. Music fans will be able to hear studio recordings that included horns, keyboards and a second guitar. This is a snapshot into the past and a taste of what Hendrix was to become and you will bear witness to an artist progressing as a producer, musician and songwriter.

Hendrix continued to evolve at the speed of light during his short but meteoric career. He electrified the blues more than any other artist that came before or after his demise. A perfect example of how he could take a classic blues track and turn it into a blues filled rock trip was Elmore James’ “Bleeding Heart.” If you are not feeling anything after this exercise of guitar genius then I would be checking for a pulse. Jimi set that tune on fire, peeling off lead after lead with pinpoint accuracy. Dissimilarly, I think what most listeners will find very interesting and entertaining is “Let Me Move You,” with saxophone player Lonnie Youngblood. Before Jimi broke big over in the UK he did some sideman work and one of the band’s he was in was Youngblood’s, who released singles such as “Soul Food.” We can only wonder now how far he could have gone into the world of jazz-rock-fusion, the possibilities remain endless. Although it is something entirely different from the Hendrix archives he does not stray from his roots on this one. Another real smoker is “Hear My Train A Comin',” which I know many folks have heard before in different settings, but believe me this one is different and it will leave a lasting taste ringing in your ears and on your psyche before the next track kicks in and you get lost all over again, finding yourself fascinated and mesmerized by the magic of Hendrix.

“Easy Blues” (ironically titled for any of you guitar players out there attempting to tab it out and play it) is a nice venture into the instrumental side of Hendrix which I have always particularly enjoyed. Even though he was a powerful and distinctive vocalist the man never had to utter a word as far as I am concerned, his guitar said it all. He made that instrument sing its own song. What makes this version special is his interplay with second guitarist Larry Lee (who is also featured on different version of “Izabella”). This one is also twice as long as the version found on the out of print 1981 Nine To The Universe album. Then again another instrumental run takes shape on “Inside Out” which would eventually become "Ezy Ryder." Jimi was always the innovator and experimenting with sounds and on this one he took a lead guitar part and amplified it through a Leslie organ speaker. Can you imagine the things he would have come up with today’s technology in his hands? It would no doubt be mind boggling.

Listening to all of this incredible music, I found myself unable to write fast enough to keep up with all the feelings and thoughts running through my head. At one point I had to stop the CD just to come up for air and then jump back in.

When “Mojo Man” starts it is like traveling to another world in regards to what we have been accustomed to hearing from Hendrix even on previously unreleased tracks and demos from pre-Experience days. It is a funky workout with Albert & Arthur Allen of the Ghetto Fighters. Similar to “Let Me Move You,” it takes us into unchartered waters for Hendrix fans nevertheless it is very entertaining while providing quality sound and music from start to finish.

“Villanova Junction Blues” is a short instrumental that closes out the recording giving us a glimpse of what Jimi had in mind for future recordings and sadly fades off into the distance and leaves you wanting for more and hoping maybe someday another artist so brilliant and influential will come along that changes everything just like he did. Somehow I doubt that will ever happen. Hendrix was one of kind and People, Hell and Angels is further evidence of his brilliant output, whether it was a finished recording or something being developed, he remains unmatched and his spirit lives on while the legend continues to grow.