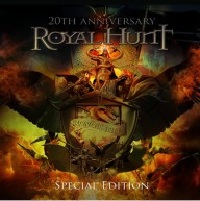 20th Anniversary is a look back at the first twenty years of the career of progressive metal band Royal Hunt. The 3CD and 1DVD package features songs from each of the band's eleven studio albums, as well as a new track, some newly recorded acoustic versions and a handful of rarities. The decision for them to cover all parts of their career is a welcome one; it would've been very easy for them just to focus on the material recorded with singer D.C. Cooper, who recently rejoined the band after an absence of eleven years. In their twenty year history, Royal Hunt has gone through many line-up changes so the only constant throughout the thirty four tracks is keyboard player André Anderson.

Given the length of time this set covers and the amount of musicians that are playing on it (by my reckoning there are at least thirteen musicians that play on this release) the collection of songs blends together surprisingly well. No doubt the decision to put the tracks in chronological order helps this. The progression in the band’s sound sounds very natural when you hear it develop this way. Often Greatest Hits and Best Of collections can sound a little bit disjointed but thankfully that is not the case here.

While the line-up has changed a lot over the years, one thing has remained constant and that is the amazing musicianship that this band has shown from day one. That is on display here on pretty much every track and there are more great guitar riffs and keyboard solos than I can count. A special mention has to be given André Anderson in this regard. Not only is he responsible for the fantastic keyboard playing that is featured on the collection but more importantly he is responsible for writing the songs on here. Song after song, this collection proves that Anderson is not only capable of writing great progressive metal but that he is also capable of writing catchy choruses and hooks that would put some pop writers to shame.

Highlights of the collection include "Wasted Time" from 1993's Clown In The Mirror. The song powers through the verses, rocking as hard as anything else on the set but then it slows down for a classic chorus that will stick in your head for days. "Tearing Down The World" is a track from D.C. Cooper's original stint with the band. The combination of his voice and the complicated backing track makes this song stand out on an album full of great stuff. "Tears Of The Sun" shows off the bands amazing technical ability, in particular the drums on this track are fantastic. The double kick drum pounds through the song and drives it along with Mark Boals' powerful vocals.
Sometimes when you get new tracks and acoustic versions put on compilations they can feel a little bit tacked on. Cynics would say that they’re there just thrown together and included to encourage fans that already own all of the bands albums to buy the new collection. That is not the case here though. There has clearly been a lot of time and care put into the acoustic versions and they sound great. The new song is good too, it doesn't quite reach the heights of some of the classic songs on here but, it sure gives fans reassurance that Royal Hunt’s next album is going to be a good one.

Overall, this is a collection that's worth picking up whether you're new to Royal Hunt or a fan that has followed their whole career. The way that the tracks have been chosen and laid out work as perfect introduction to newcomers and the new stuff is something that long time fans are really going to want to hear.

Key Tracks: Wasted Time, Tearing Down The World, Tears Of The Sun