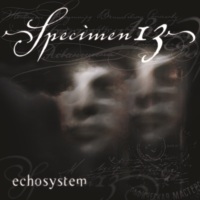 On the desk this last week has been a CD by a band I have certainly not come across before. The band is Specimen 13 and the title of the CD is Echosystem. I always look forward to listening to these “unknown” bands as there is never any preconception of what to expect.

What is Specimen 13 and what have they produced?  Specimen 13 is a duo, Denis Rodier and Martin Vanier and the mini-album is described by the duo as “powerful eclectic prog rock.” Denis is the originator of the group and apart from being a superb drummer, is also an internationally renowned artist of graphic novels and Martin is the guitarist, bass player and soundscaper. (assuming there is such a word)

They are joined on the recordings by a variety of guest musicians including Tony Levin (chapman stick) from Peter Gabriel/King Crimson/Pink Floyd/Yes, Pat Mastelotto (drums) from King Crimson and Mister Mister and Trey Gunn (guitar) from King Crimson.

Echosystem is a 5 track release containing just over 34 minutes of music. “Juggernaut” is the shortest track at 5:52 minutes and the longest track is “Citoyen Robot” which clocks in at 10:25 minutes. The mini-album was recorded over a period of time and in different places, including Quebec, Texas, New York, Germany and Austria, and is the introductory installment of the Specimen 13 project. The final CD release will include videos and a graphic novel.

“Sheer Force” starts off with a killer of a simple guitar riff over thunderous bass and drums. There are then nice keyboard effects with washes of synths and the return of that guitar riff. The overall effect is certainly cinematic as you can imagine this music in the background of a good sci-fi movie. The track switches easily from the heavy thundering to the light and breezy, but tends to spend more time in the heavy area. There is enough shade and light in this track to hold the interest of the listener. The last minute or so conjures up images of a desolate industrial wasteland.

The last track on the album, “Torngat,” begins with the sense of isolation scenario again as the instruments appear fleetingly to paint an aural picture (very individual to the listener.) Whispered voices drift in and out of proceedings as the track moves towards the 3 minute mark. There are constant shifts in the sound patterns which are just on the point of outstaying their welcome when the track ends very abruptly.

The band describe their music as being similar to Tool, Porcupine Tree and the more recent King Crimson work, but I must admit, I would probably put some of the influences down to the spacier side of Krautrock from the 60’s and 70’s, such as Popul Vuh, Ash Ra Tempel, and Faust.

I always feel that an instrumental album, or mini-album, requires to be “on the button” if the attention of the listener is to be maintained. I did feel that my attention was starting to drift on one or two of the tracks and they might have benefitted with a little defter editing. I have no doubt that the final version of the release where videos will link to each track and a graphic novel will be available, will certainly “top up” the interest level in the package as a whole.

Worth a listen, if not an essential buy and again, there are enough interesting passages contained within Echosystem to make the next release by the Specimen 13 project worth looking forward to.