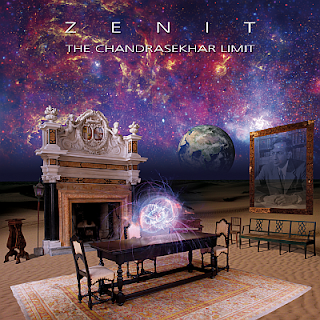 Switzerland - One of the most respected progressive rock bands ever to emerge from Switzerland, Zenit, have released their third album 'The Chandrasekhar Limit' on Galileo Records on January 28, 2013. Possibly the most ambitious release of 2013, right from the beginning of Zenit's new 69-minute masterpiece, Andy Thommen (formerly Clepsydra), affixes a seal with his distinctive bass playing on the first song (“Awaken”). Later, with the start of the guitar, you will somewhat be reminded of the Clepsydra sound: awesome guitar-bass team play! Here is the beginning of what to expect from this brilliant album – quality!

Says Andy Thommen, “We've chosen 'The Chandrasekhar Limit' as the title because this mathematical threshold defines if a white dwarf star remains a star or becomes a black hole... So, as a band we feel that we are passing a crossroads without knowing where this track leads to. We do not know if we are above or below the Chandrasekhar limit.”

Zenit was founded in Switzerland in 1998 by bass player Andy Thommen, Keyboardist Ivo Bernasconi and drummer Gigio Pedruzzi, based on their wealth of experience with bands like Clepsydra, Changes and Brainstorm. In 2001, now with the addition of singer Lorenzo Sonognini, Zenit released their debut CD 'Pravritti' with Italian and English lyrics, followed by various inspiring live performances in relevant prog festivals. In 2006, with the addition of Luigi Biamino on guitars, the band released the second album called 'Surrender'. With captivating, elaborate songs and music that harkens to the work of bands such as Genesis, Marillion, Supertramp, Kansas and Gentle Giant, Zenit's second album garnered praise from critics and fans alike worldwide.

Says Andy, “After 'Surrender' we did several shows, and we already had different pieces of tunes for this new album we were working on or just playing to see how it feels. On our show in Montreux, which was also filmed, we played two songs that made it onto 'The Chandrasekhar Limit': 'Awaken' and 'PiGreco'. We started writing and demoing the new album with our previous drummer Luigi Pedruzzi. For most of the songs we started on a rough idea by our keyboardist Ivo Bernasconi, then the whole band worked on it, until it was ready for a demo recording. Working on it for us means play it over and over again with absolute freedom to improvise changes, and normally when we get a few 'wow' reactions in the band we know we are close. The longest track 'The Daydream Suite' (25 minutes) was different. Ivo had just a basic idea; we started playing on it, it just came one note after the the other, one chord after the other. This was a magic band experience. When we finished recording the demos our drummer left the band. We made one single call to a friend and drummer. As he was teaching drums in Lausanne (in the French speaking part of Switzerland) we asked him if by chance he knew someone... His answer was 'Me'! Within a bit more than a half a year he was ready to record the drum tracks for 'The Chandrasekhar Limit' with a fresh breath of new energy! In sum, the essence of our way to work is: play it, play it and play it again until it sounds good, and only then you can start recording.”

“The new Zenit album 'The Chandrasekhar Limit' is superb, some of the best modern prog rock I've heard for a long, long while”. - Paul Baker, ARfm, UK

Zenit's musical influences are varied and diverse and include artists such as Genesis, Pink Floyd, The Flower Kings and Spock's Beard. Stand out tracks on Zenit's new album: The marvelous 17-minute song “Matrimandir” brings a breath of Asian sounds in a very subtle but delicate way without being brash, despite the Sanskrit lyrics now and then. The 25-minute opus “The Daydream Suite” brings to mind the work of Pink Floyd, including all the main elements a prog suite should have: crazy keyboard solos, melodic guitar lines, cool bass parts and complex choirs, harmoniously in action. The rocking instrumental sound of “Pulsar”, the sweet and sinful ballad “Club Lady” and the screaming-jazzy “PiGreco” song, jointly make up an impressive and progressive rock album of the 21st century.

Says Andy, “There was no structured plan for this album. No plan to make it symphonic, epic, neo or retro...it just came out as it is. There are jazzy and samba rhythms, even Sanskrit lyrics bits and Indian sounds and ambiances. The only thing we wanted to create was an ensemble of very different ambiances and feelings, and transmit to the listener the fun we have playing these songs.” Plans to tour in support of the release of Zenit's 'The Chandrasekhar Linit' are currently in the works.