Review: The Glutton-Parts Of Animals 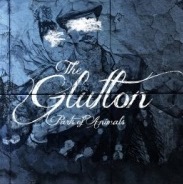 The Glutton are a 4 piece band from Norway, Oslo to be exact, and have just released their debut full length album, Parts of Animals. The band is in the process of setting up their website and scouring the internet doesn’t glean a huge harvest of information about the band. The members of the band are listed as, Jonas (drums), Asmund R Saeboe (synths/accordion/vocals), Eirik Orevik Aadland (guitar/trumpet/vocals) and Carl Martin Rosenberg (bass).  As the instrument list includes a couple of instruments you might not expect (accordion and trumpet) it might suggest that The Glutton are a little out of the normal mold. This reviewer is always up for a challenge so an interesting time awaits.

There is an almost bewildering array of bands that are listed as having an influence on The Glutton, including Sigur Ros, The Mars Volta, Ulver, Radiohead, Godspeed You Black Emperor, Mogwai, Yes ,King Crimson and those German pioneering musicians, Can.

Parts Of Animals is a 5 track album running to a total of around 45 minutes. The shortest track is track 4, “Rite de Passage” at 4:05 minutes and the opening, and title, track “Parts Of Animals” is the longest at just over 13 minutes (13:17).

The opening track, which is also the title track of the album, “Parts of Animals,” starts with a single note droning away with various instruments buzzing in and out over the top, without overstaying and forms a very interesting atmospheric introduction to the album. Around the 1:30 minute mark, a simple melody is picked out over a bass line and cymbals before the “real” drums add some substance to the track, which is constantly growing. A terrific synthesizer melody rushes to the fore before heading away, leaving a fuzz ridden guitar leading into a more “conservative” passage of bass/drums driving a keyboard led melody. A guitar soars in and out above all this, cutting in like a saw, and the track is driven along in a “taking no prisoners” kind of way. The subtle, and sometimes, not so subtle changes in tempo certainly maintain the interest, with the initial theme reappearing as the track moves past the 8 minute mark. All the band members are given the freedom to show what they can do and they certainly appear to be very accomplished musicians. Around the 10 minute point however, there is a discordant passage which does not add anything to the track (in fact, I found the total opposite) before the track settles back into the earlier theme again. Overall, a very interesting opener, but I did feel it to be rather long and think that if the track had finished prior to the discordant passage around 10 minutes, it would have benefitted the track, and dare I say, the listener as well.

Two of the remaining tracks, “Idiot Tornado” and “Ples Zderavca,” have terrific sections of music which paint vivid aural pictures in the listeners mind, but I find that the forays into polyrhythmic territory are more of a distraction to what has gone before, and comes after.

I am not quite sure why the short track 4, “Rite de Passage,” appears on the album. It is a soundscape which I really didn’t find particularly interesting and even at odds with the other four, more substantial tracks. It starts, and it finishes, with nothing in particular happening in between.

The last track, “Luciferase” (8:48), stands out after the previous three tracks, because it is so different. A gentle, drifting track which meanders along, featuring vocals which add to the atmosphere before a “proper” vocal appears to carry the track on. The overall sound builds slowly taking the track to its 8:48 minute finale, and I found this track by far the most interesting on the album.

I find this album a bit of a conundrum in that I find myself enjoying large chunks of the tracks, while finding other parts discordant and distracting. The band have produced an interesting album overall, which is not the easiest to “get into,” although it does provide an indication that there may be much more to come as the band evolves.

Certainly an album to have a listen to, especially if you are a fan of the bands listed as influences at the beginning of the review.
3.5/5 Stars