Review: Nektar-Journey To The Centre Of The Eye (Re-mastered w/Bonus disc) 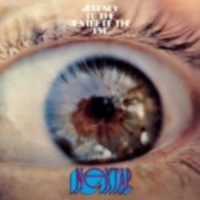 Most of the albums for review that have landed on my desk recently, have been a mixture of modern bands that I was well aware of, and modern bands that were on the fringes (or even further) of my aural horizons and so to get this one to review brought back memories from a time, long ago in the past. The band in question, is Nektar, and the album for review is the re-mastered, re-issued (with a bonus disc), debut release by the band in 1972, Journey To The Centre Of The Eye.

Nektar are one of those 70’s classic psychedelic/progressive bands who have had their back catalogue re-mastered and re-issued on more than one occasion and there is the slight suggestion of overkill with another release of this album. The teaser, of course, is the additional live “bootleg” disc from the same year of a complete concert recording of the album.

To many people, Nektar were a German band, but in fact, were British and only one of several bands that based themselves in Germany. Their music was thought of as “Krautrock” and although there are the telltale signs, such as the swirling keyboards and mellotrons, and the fuzz drenched guitar tones, they had their roots firmly in the psychedelic rock genre. The band listed as their members, 6  people, Roye Albrighton (guitars and vocals), Alan Freeman (mellotron, pianos, organs and vocals), Ron Howden (drums and percussion), Derek Moore (mellotron, bass and vocals), Mick Brockett (liquid lights) and Keith Walters (static lights). It is interesting to see that 2 of the named members deal specifically with the lighting effects of the band.

Journey To The Centre Of The Eye is a 13 track album which has a running time of around 42 minutes, and the live “bootleg” bonus disc contains only the one track, a 46 minute version of the album. The re-mastered album has varying lengths of tracks, with the shortest being “Look Inside Yourself” at only 45 seconds and “Burn Out My Eyes,” being the longest track at 6:35 minutes.

Nektar’s debut album, Journey To The Centre Of The Eye, I feel was the best of their releases, which is not to say that the others were not good, but Journey To The Centre Of The Eye  was a really stunning example of symphonic prog with a huge slice of British psychedelia. References were once made to say that Nektar sounded like a Pink Floyd that had been put through a Teutonic filter. What is very evident on this album is the very specific melodic textures that are utilized and puts them in a grouping that would include The Moody Blues and The Nice.

Journey To The Centre Of The Eye is a concept album about an astronaut’s adventure and the superb musicianship on display tells the story in varying ways. Roye Albrighton is an impressive guitarist with his aggressive riffs, which pepper the tracks, as well as the solo slots and the other effects. The stunning mellotron/organ/piano effects provided by Alan and Derek ensure that there is a feeling of the grandiose injected into the proceedings. Neither of the aforementioned would stand out as much however, if it were not for the “engine” of the band, the bass of Derek and the drums provided by Ron which underpin the tracks.

The album is best listened to as a complete entity, as are all quality concept albums, but there are a few highlights that can be mentioned. The second track, “Astronaut’s Nightmare” (6:26) has excellent organ sections and an amazing spacey feel, hinting at similarities with both Pink Floyd and Cream. “Countenance” (3:34) is an almost ambient, very spacey sounding track with wonderful organ sounds and terrific guitar/bass interplay. Another highlight is actually listed as two tracks, but as they are “The Dream Nebula Pt. 1” and “The Dream Nebula Pt.  2,” I will treat them as one track. This is an ever-shifting guitar/ bass led track, but as part two starts with a fairly long fade into the music, I’m not sure why they are separate tracks. Despite that anomaly the track is very ethereal and amazingly atmospheric.

The bonus disc which contains the live recording of the album Journey To The Centre Of The Eye from 1972, is not the best quality recording, which is not surprising as it is over 40 years old and recording techniques have improved by leaps and bounds in the intervening years. As a “historical” recording it will have merit for the diehard Nektar collectors, but I don’t feel that it adds anything to the studio album.

If you are a Nektar follower, then it seems likely that you will possess a copy of this album already, and as I have suggested, the bonus disc isn’t much of an incentive to buy it again. As an entry into the back catalogue of Nektar it is the perfect starting point. Journey To The Centre Of The Eye is an excellent example of psychedelic/progressive music, which whilst taking influences from many of the huge names in the genre, never overtly copies them.
4/5 Stars