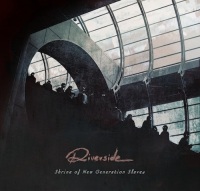 Shrine of New Generation Slaves is the eagerly awaited fifth album from the Polish band Riverside. It has been 4 years since the last full album release from the band, Anno Domini High Definition, and a couple of years since they issued the three track EP, Memories in My Head.

Interestingly enough, I think that in that time, Riverside have undergone a similar style evolution to that shown by the band Opeth, in that the heavier metallic sound of Riverside has been tempered with a much more relaxed, even mellow, way forward.

The band consists of four members, Mariusz Duda (vocals and bass), Piotr Grudzinski (guitars), Piotr Kozieradzki (drums) and Michal Lapaj (keyboards). They were formed back in 2001 and their sound has been attributed to their shared love of heavy metal and progressive rock and has been influenced by bands such as, Pink Floyd, Porcupine Tree, the previously mentioned Opeth, and also Dream Theater.

The new album, Shrine of New Generation Slaves, has a total running time of around 50 minutes, spread over 8 tracks ranging in length from the shortest, track 4, “We Got Used To This” clocking in at 4:11 minutes and the longest, track 7, “Escalator Shrine,” running on for 12:41 minutes.

“Depth Of Self Delusion” starts with a terrific bass intro then a gentle guitar melody sets this track into motion. There is then a change of tempo, with the rest of the band joining in along with the very clear and powerful vocals by Mariusz. There is then a majestic lead guitar by Piotr G which floats in above the vocals. All of this contributes to a very atmospheric track. As the track progresses, the vocals become a little bit more forceful and then there is, around the 3:15 minute mark, a gentle acoustic passage which sees the vocals returning to the style of earlier in the track, and what appears to be a cello in the background. A further change in tempo at around 4:15 minutes heralds a heavier passage in the track whilst still maintaining the superb atmospheric feeling of the track. The melodic lead guitar returns around 5:45 minutes, with the vocals from Mariusz also returning, and this then merges back into the opening acoustic melody which takes the track out.

The second track I really like at the moment is “We Got Used To Us” which kicks off with a short “backward” vocal before the solo voice of Mariusz starts the track properly with a piano backing, from Michal, filling in behind the voice. The addition of the drums (Piotr K) and bass (Mariusz) fills the track out and again I am very impressed with the clarity of the vocals. The lead guitar then gets some melodic riffs in, which sound off in the distance, to complement the vocals. Around the 3:00 minute mark there is a wonderful guitar passage underpinned by the bass and drums which then eases the track out via the solo voice and piano again.

There is an almost Spanish feel to the guitar introduction to “Escalator Shrine” which is played over a long droning note and again, immediately, the track has a very atmospheric feel to it. The bass picks out a melody as the other instruments join in, together with those superb vocals. There then follows a stunning passage with guitar and keyboards, by Piotr G and Michal, respectively, behind the vocals of Mariusz, which conjure up an almost “jazzy” feel to this part of the track, before the lead guitar “bends” a superbly melodic riff over the vocals. This is the closest that Piotr G gets to “letting rip” in this track, albeit in a very subdued manner. At around 4:45 minutes, the tempo is pushed up several notches by the bass/drums combination and the magnificent keyboard passage carries the track onwards. On reaching the 6:30 minute mark, the vocals return but this time a bit more forceful before the track enters a “spacey” passage with gentle melodic riffs floating around in the background. The drum and bass influence builds up again driving the track along until the reappearance of the vocals and the track eases into the more “laid back” scenario, to the point that the listener feels that this is leading to the fade out. This is not the case, as the tempo lifts again, before the track is allowed to fade out.

I find this album, Shrine of New Generation Slaves, different from earlier Riverside albums as it seems, as I suggested at the outset, that the band have evolved between the previous album, Anno Domini High Definition and this release and found a real balance between light and shade. There are superb acoustic melodic passages interspersed with heavily riffed areas, resulting in a very different feel to Riverside.

I feel that this is definitely another album to bear the “One To Buy” sticker and should find its way onto the shelves of prog music lovers everywhere. Long standing fans of the band should take this “new” Riverside to heart without question, in much the same way as the die-hard Opeth fans did with the release of Heritage.
5 Stars

Key Tracks: The Depth Of Self Delusion, We Got Used To Us, Escalator Shrine